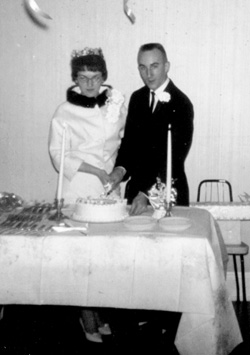 The matron of honor was Patty Yust and the best man was John Neville.

Phil was a graduate of Columbus Bussiness College and later was the general manager and vice president of Wright Brokerage Company where he retired after 25 years. Helen (Chub) graduated from Rio Grande University with an associate degree in nursing and worked at River Valley Health System as relief supervisor and nurse manager of the surgical floor and pediatrics. She retired after 25 years of service when the hospital closed.

They celebrated their anniversary with a dinner with family and friends in Deltona and then took a trip to Key West for several days. They are blessed with two children, Phillip of South Point, and Debbie Martin Wieteki, who resided in Norton Shores, Mich. They have four grandchildren, Stephanie Martin Roush, Joseph Martin, and Michael and Ethan Preston, who reside in Ironton.