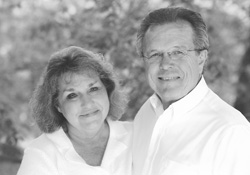 Cliff and Jeanie Hartley will celebrate their 50th wedding anniversary on Saturday, May 18, at a reception held in their honor from 4 to 6 p.m. at the Northside Baptist Church in Millersburg.

Cliff is the founding pastor of the Northside Baptist Church and currently serves as pastor emeritus. He is also the moderator/leader for the Buckeye Erie Baptist Association. He has pastored three churches in Ohio and Florida and recently served as interim pastor at Southview Baptist Church in Galion. He is beginning his 38th year in pastoral ministry. He is the author of two books, “Saturday Night Musings,” and “Are You Ready For The Rapture.”

He is a graduate of Dawson-Bryant High School in Coal Grove and was the first pastor to be trained and graduate from Lynchburg Baptist College, now Liberty University, in 1975. He has worked as an engineer with the C&O Railroad, owned his own plumbing business and is a retired plumbing inspector for the Wayne County Health Department.

Jeanie is also a graduate of Dawson-Bryant High School in Coal Grove and attended classes at Lynchburg Baptist College. She is an accomplished deaf interpreter and has been recognized as an expert in her profession. She spent many years as an administrator and teacher in Christian schools in Ohio and Florida. She is a successful business woman, having operated two businesses in both Charm and Sugarcreek. She has been active in community leadership in Holmes County.

She has faithfully served as a pastor’s wife for 38 years and has been active in each of the ministries where she and Cliff have served. She is well known as a Bible teacher and conference speaker. For the past 20 years she has served the students at Northside Baptist Church as their youth leader and mentor.

Cliff and Jeanie are childhood sweethearts and were married on May 18, 1963, in Coal Grove. They have a loving family consisting of their oldest son Brett, his wife Tatiana, and their two children Madison and Taylor, all of whom live in Lynchburg, Va. Their youngest son Todd, his wife Sue, and children Cara and Nathan live in Millersburg.

The public is invited to attend a reception in their honor and celebrate their 50th Anniversary. Northside Baptist Church is located at 1207 Wooster Road, Millersburg.

Trista Dawn VanMatre and Kevin Johnathan Ferguson will be united in marriage at 3 p.m. May 18, 2013, at Oakland... read more