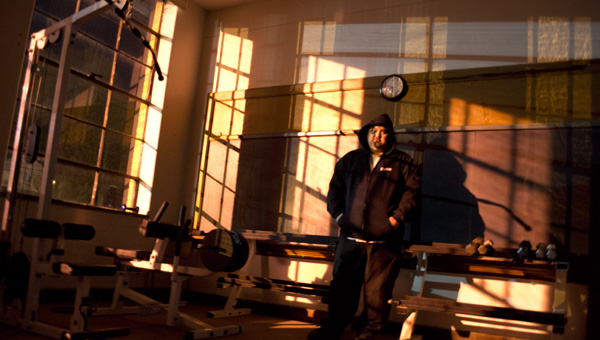 David Lee Maynard, founder and lead investigator for Quest Paranormal Investigations, Inc., stands in the gym of the Chesapeake Community Center. Maynard says the room is a hot spot for paranormal activity.

Leading a group down dark hallways of the Chesapeake Community Center, silent except for the echoes of footsteps in search of a little girl in a blue dress, a man who used to clean the floors or something not so nice in the basement, this is a typical Saturday night for David Lee Maynard.

Of course, it becomes not so typical for those the Ironton man is taking up and down the dark staircases, oftentimes their flashlights the only source of illumination, when the “people” they are looking for have not been with the living for quite some time.

Maynard has always had a fascination with the paranormal. He said as a child he would get his hands on whatever books he could find.

“I just remember as a kid I was interested in this stuff,” Maynard said. “I would read stories on it. Of course, back then they didn’t have a lot of this stuff they have on television. There weren’t really a lot of books on it either and of course there was no Internet. So basically anything I could find anywhere that had anything to do not only with hauntings, but also cryptozoology, UFOs, anything like that I would read or watch.”

Maynard’s search for the paranormal honed in on the community center after reading an article in his local newspaper about the ghost of a little girl said to haunt the building. After reading the article, Maynard said he had to get access to the building.

“My buddy Jim and I came up here and set down with (center director) Ruth (Damron) and she agreed to let us come that night,” Maynard said. “Tim, who works here, had to stay with us that night because they didn’t really know us at the time. We did our thing, caught some decent evidence and over the years we have built a really good relationship with Ruth and the center.”

As the relationship grew, Maynard and Quest Paranormal Investigations Inc., the group he started in 1985 to provide an official outlet for his need to seek the unknown, knew they wanted to help give back to the center that had allowed them free reign to uncover the secrets within.

There have been sightings of the little girl, as well as a male figure believed to be a former janitor during the day, but Maynard said less human contamination at night increases the likelihood of sightings, and he wanted to find a way to peak others’ curiosity while helping the center.

“About two years ago we started public hunts,” Maynard said. “For a nominal fee we give people the chance to come in at night and learn about the history of the building, the activity and hopefully to see something themselves. The huge majority of the money collected goes back toward the center for equipment and renovations.”

Maynard said he believes the building sits upon a vortex, a place where spirits can travel more freely through our world and another. He doesn’t believe those who inhabit the building are the souls of the people who used to physically walk the halls, but more of a strong emotional imprint left behind.

For instance, the janitor died at home, Maynard said. But his love for the children, the school and his job left behind such strong feelings something stayed behind to continue watching over the building he dedicated his life to maintaining.

But the emotional imprint is not what he is continuing to look for.

“I’m searching for the human soul,” Maynard said. “I’ve lost three very good friends and both my parents and I’d really like to know they are out there somewhere. I think it could be possible, but I’ve never seen it. For me, the soul would be a person who passed over, who still maintains memories and feelings, but have come back to watch over their families.”

Maynard said he does not care how long someone has been hunting for ghosts, how many shows they have been on or what they claim, no one is an expert in the field of paranormal investigation. The man said he plans on seeking answers until the day he dies.

So, for as long as he walks among the living, Maynard says he continues to search for that one piece of pure evidence that eliminates all doubt about the world he already knows exists.