Slick roads cited as cause for accidents 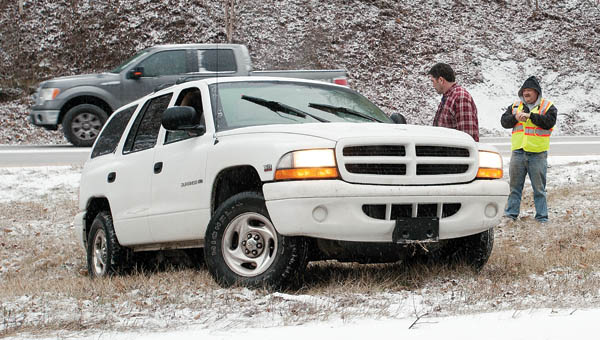 A white Dodge Durango sits in the median on U.S. 52 after losing control in the eastbound lane. Friday’s snowfall caused several accidents throughout the Tri-State including a multi-vehicle accident on westbound U.S. 52.

The one to two inches of snow and sleet that hit the Tri-State Friday morning kept troopers from the Ohio State Highway Patrol busy for about four hours checking out accidents.

That’s where there was a rollover that backed up traffic followed by another accident caused by a driver coming the other way.

Kie Lawrence Jr., 88, of South Point was driving a Ford Ranger eastbound at the top of Mont Miller between the South Point exit and Burlington-Macedonia Road when he lost control of his vehicle, according to Smith.

“He lost control due to going too fast and went through the median hitting two vehicles that were stopped waiting at the rollover crash that were facing westbound,” Smith said.

The Ford Ranger struck a Toyota and a truck. The Ranger was totaled but the other two vehicles only had minor damage.

Lawrence was transported to St. Mary’s Medical Center where he was held overnight for observation.

Overall there were 10 weather-related crashes that the OSHP responded to with four of those on Mont Miller.

“We were running all over the county from Lawrence Street to Waterloo,” Smith said. “Most of them weren’t serious crashes, minor fender benders.”

The bad weather started about 9 a.m. when the sleet hit. Schools shifted into snow schedule mode with the first classes dismissed at noon. Road crews were out throughout the day maintaining roadways.

When bad weather hits, drivers should slow down so they can manage possible slick roadways, the patrol said.

“People should make sure their windshield is defrosted,” Smith said. “Where they can see, not that little patch. It’s taking time and slowing down and giving themselves extra time to get where they need to go.”

Despite a bad start to the weekend, next week promises high temperatures in the 50s and lows in the 30s with precipitation this time in the form of rain, not snow.

Even if they live in an apartment with no yard at all, Ironton residents can enjoy raising flowers and vegetables... read more