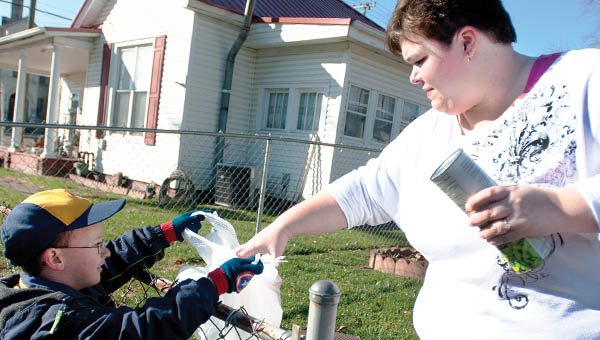 COAL GROVE — Armed with white plastic grocery bags filled with canned corn, tomato soup and green beans, Stephan Barker ran down from the front porch of Jessie Nichols’ house on High Street and over to the waiting red van parked along the street in Coal Grove.

Nichols had just answered Stephan’s request for canned food for those in need and she responded with enough to fill a bag.

“This is awesome,” he said.

When he reached the van, Mary Ellen Bryant took the packages and stashed them in the cargo hold. That was a scene that played out over and over Saturday morning as members of Cub Scout and Boy Scout Troop 103 conducted their annual Thanksgiving food drive.

After about a half-hour going up and down High Street, Stephan had already collected 40 cans of food.

About 20 Scouts came out on Saturday starting at 9 a.m. to go door to door asking for food. They would do that for about three more hours. Then they took all that they had collected to Community Missionary Baptist Church on State Route 243 where their contributions would be added to others to make sure those in need had food for the Thanksgiving holiday.

Nichols commended the young people for their efforts to help their community.

“It is a great project, especially with the way the economy is,” she said. “There are so many people in need.”

Bryant sees the food drive as serving multiple purposes for the Scouting troops that are sponsored by the Coal Grove Lions Club and the Perry Township Volunteer Fire Department.

Even though Saturday was a day off from school, Cub Scout Stevie Easterling liked knocking on doors asking for food.

Joining him was his mother, Mary Easterling.

“There are kids they go to school with and some are not as fortunate,” she said.

“They need a little help.”

On Monday the Scouts will join in another service project at First Baptist Church in Russell, Ky., where Tri-State volunteers will put together food boxes for others needing help this year. Last year the troop was able to put together 180 boxes.

“It is giving back,” Keith Simmons, a troop leader, said. “These kids are young and don’t always understand about giving back. It is an important thing.”

The bid process had started for a signalization improvement project in Ironton that will replace traffic lights at six intersections.... read more