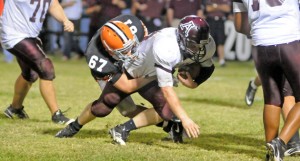 Looks can be deceiving.

What looks like an easy game for the Ironton Fighting Tigers has raised a lot of concern for head coach Mark Vass.

Ironton (4-0) is coming off a big and emotional win against Ashland. The Fighting Tigers play at 1-3 Portsmouth and should be heavy favorites.

That’s what has Vass concerned.

“This is their first home game and I expect them to be sky high for us,” said Vass. “They’ve got two really good running backs who can make big plays at any time. We can’t have another game like we did against Gallipolis.”

Ironton was emotionally flat two weeks ago and escaped with a 14-13 win over Gallipolis. Portsmouth looms as another trap game with a talented Johnson Central awaiting next week.

Portsmouth (1-3) lost its opener 36-24 at Lucasville Valley when the defense was missing both starting linebackers.

The Trojans rebounded with a 21-18 upset at Portsmouth West before losing 43-13 at Wheelersburg.

Last week they fell 41-14 at Minford but the game was just 20-14 at the half and the Trojans top two running backs and key offensive weapons left the game before the half with injuries and did not return.

“These are high school kids and they read the scores. But you can’t go by the scores. Everyone matches up differently and there are other factors involved. We have to come ready to play. Ironton and Portsmouth is always a tough game,” said Vass.

Portsmouth’s sophomore Darion Robertson (6-2 170) is an outstanding running back who started as a freshman. He is joined in the backfield by Johnie Charles (5-7, 170).

“Their quarterback is a good athlete and he has a good arm,” said Vass. “Robertson has good speed and he can go. Charles runs hard and breaks tackles.”

“Both their receivers are good athletes and they can make you miss,” said Vass.

Albrecht has been injured and may not play.

“Those are two good linebackers. (Sexton) makes some big hits and (Lisath) covers a lot of ground running to the ball,” said Vass.

In the secondary are Dickerson and Clark at the corners with Ausitn Hollins (5-11, 160) the safety.

Jim Walker jim.walker@irontontribune.com   The race has begun, but the finish is still six weeks away. The first Ohio High... read more