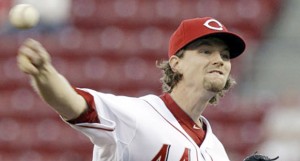 Cincinnati Reds’ pitcher Mike Leake threw his second complete game of the season in a 6-1 win over the New York Met on Wednesday. (The Tribune / MCT Direct Photos)

Rolen and Frazier hit back-to-back home runs, and Leake pitched his second complete game of the season, helping the Cincinnati Reds extend their win streak to five with a 6-1 win over the Mets on Wednesday night.

Leake (5-7) faced three batters over the minimum and added an RBI single. He allowed four hits, no walks and struck out four while besting the pitcher who went into the game tied for the major-league lead in wins and the National League lead in strikeouts.

“I was just a little, old four-winner,” Leake said with a slight smile about being overshadowed. “It was a good all-around game for us. You couldn’t ask for more.”

The win was his first in four starts since July 24.

Manager Dusty Baker was impressed with Leake’s efficiency. The right-hander finished with 111 pitches, 70 for strikes.

“He had it going, big-time,” Baker said. “He didn’t have a lot of strikeouts. He used his defense.”

Jay Bruce homered for the third consecutive game, helping the first-place Reds improve to 21-8 since All-Star first baseman Joey Votto was forced out of the lineup with a left knee injury.

Dickey tied his season high for hits and home runs allowed while slipping to 2-3 over his last five starts. The Reds touched Dickey (15-4) for 10 hits, including three homers, and two walks in six innings. The knuckleballer had nine strikeouts.

“If you center the knuckleball, even when it’s got no spin, some can go a long way,” Baker said. “We centered a couple tonight.”

Dickey twice was visited on the mound by umpires, who ordered him to remove friendship bracelets from his wrists. He’d been wearing them since January after his daughters made them to commemorate his climb of Mt. Kilimanjaro, he said.

“I’ve had them on for every start, every bullpen session,” Dickey said. “I was a little angry at first.”

He didn’t use the distraction as an excuse.

“When you throw mediocre knuckleballs and they don’t miss them, they can be hit a long way,” Dickey said.

Mets manager Terry Collins said he was told by umpire Jim Joyce that they were following a Major League Baseball directive and that their actions weren’t prompted by any complaints from the Reds.

“He’s got to pitch through that, and he knows it,” Collins said.

The Reds wasted no time gaining an early edge against Dickey. Zack Cozart led off Cincinnati’s first with a double down the left field line. Drew Stubbs sacrificed Cozart to third, and he scored on Brandon Phillips’ soft single to center.

The Reds extended their streak of consecutive scoreless innings to 28, the team’s longest since a 32-inning streak in June 1963, before the Mets pushed across the tying run in the fourth. Mike Baxter led off with a single off the glove of second baseman Brandon Phillips — New York’s first baserunner — and moved to third on Ruben Tejada’s single before scoring on Daniel Murphy’s double-play ball.

Rolen, who missed Cincinnati’s previous seven games with lower back problems, broke the tie with his sixth homer of the season, a 357-foot drive into the left field seats on a 3-1 pitch. Two pitches later, Frazier launched a 1-0 pitch 474 feet to center field for his 15th homer of the season.

Frazier’s homer is the 10th longest in the 10-year history of Great American Ball Park, according to the Reds. He said it’s the longest of his professional career.

“I’ve hit some to left field that went pretty far, but nothing like that,” the rookie said. “It felt pretty good.”

Bruce led off the sixth with a 428-foot shot into the right-field seats on a one-strike pitch, his 24th. His two-run homer gave the Reds a 2-0 lead in their 3-0 win over the Cubs in Chicago on Sunday, and he followed that with a three-run walkoff homer in the Reds’ 3-0 win over the Mets on Tuesday. He has homered in three consecutive games for the second time this season. He also did it April 26-29.

Leake added a two-out RBI single in the sixth and Ryan Ludwick extended his hit streak to seven games (10 for 29, .345).

Notes: The Mets will go with a six-man starting rotation for at least the next two weeks, manager Terry Collins said Wednesday. The only exception is RHP Dickey will go every fifth day, Collins said. The other five will be RHP Matt Harvey, LHP Johan Santana, LHP Jonathon Niese, RHP Chris Young and RHP Jeremy Hefner. … The Mets optioned C Rob Johnson to Triple-A Buffalo to make room on the active roster C Kelly Shoppach, who joined the team Wednesday after being acquired from Boston in a trade the day before. … The last out of Felix Hernandez’s perfect game for Seattle against Tampa Bay was shown on the Great American Ball Park scoreboard, with called strike three drawing scattered applause from the sparse pre-game crowd.

Even preseason has mismatches

The Associated Press   Even in the preseason, this one looks like a mismatch. The Packers, considered by many the... read more