Bring on the animals; It’s fair time once again 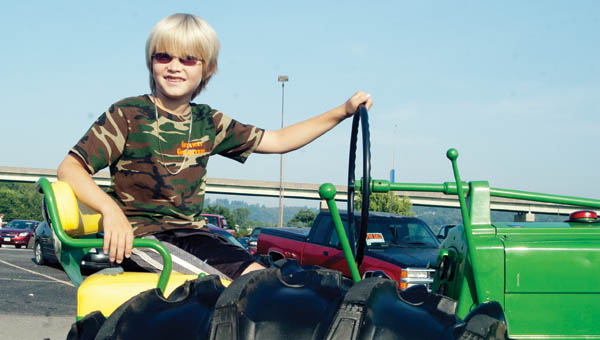 Brice Gorby, 10, of Chesapeake, climbs up on a tractor while he waits for the start of Saturday’s fair barn parade.

ROME TOWNSHIP — Even in Saturday morning’s 92-degree heat 10-year-old Brice Gorby was ready for a parade. In fact, he was quite willing to take over the wheel of his father’s tractor if that’s what it took.

This will be Brice’s first year for showing animals at the Lawrence County Junior 4-H Fair and as a member of the Getaway Go-Getters, he is bringing a pair of New Zealand rabbits to make the rounds of judging.

“I’m excited,” he said as he waited with his mother, Shawna Gorby, and younger sister, Leah, at the Kroger parking lot in Proctorville for the specially called parade to the fair grounds.

By 8:30 a.m. John Deere tractors with their iconic green and yellow panels shining in the morning sun, fire trucks and Model Ts made the pilgrimage from the outskirts of Proctorville to the fair grounds about two miles away.

The attraction there was what fair supporters had long-awaited and weren’t always sure was going to happen — a new livestock barn and arena.

Legal battles with a contractor and a series of construction delays may have made the dream of a new barn seem more like a nightmare for some supporters.

But Saturday morning’s ribbon cutting showed the barn was not just there. It was open for fair business.

“I’m excited about it,” Shawna Gorby said. “I know there were a lot of mixed feelings. I hope this puts everything to rest.”

Crowding around the steel and cement structure were officeholders glad-handing for the upcoming election; 4-Hers checking out freshly painted stalls to house their prized animals and proud parents clicking cameras as fervently as the most diehard paparazzi.

“This is a great day for Lawrence County,” Commission President Les Boggs said before the mid-morning ceremony. “There were a lot of hurdles and difficulties to overcome. But now everyone can see the fruits of that labor.”

Throughout the 10-minute ceremony supporters big and small were lauded from Bob Sells and his son Ryan Sells, whose pledge financed part of the barn, to the 4-Hers who fair board member Randy Lambert said “donated five or 10 dollars out of their pocket to make sure we had a barn.”

The earlier days of trouble seemed to be forgotten as crowds climbed up on the bleachers to listen to official after official praise those who supported the project.

“When you have a vision and a commitment that is pure,” Commissioner Bill Pratt told the crowd, “you don’t give up.”