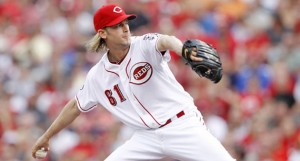 CINCINNATI (AP) — Giving up his no-hitter in the eighth was bad enough for Bronson Arroyo. Losing the lead soon after made him feel awful.

At least the Cincinnati Reds rallied to win the game.

Arroyo took a no-hitter into the eighth inning on Tuesday night before giving up a three-run lead, but Drew Stubbs led off the bottom half with a homer, sending the Reds to a 4-3 victory over the Milwaukee Brewers.

Arroyo allowed only one runner through the first seven innings, hitting Ryan Braun in the first. The slumping Brewers hit only four balls out of the infield during that stretch.

Somehow, Arroyo came away with nothing to show for all of it — still only one win in his last nine starts.

“After a gem like that, a no-decision is terrible,” Arroyo said.

Milwaukee pulled even with three hits off Arroyo in the eighth, but Stubbs connected on a first-pitch fastball from John Axford (1-5) for his first homer since June 2.

“Bronson got the short end of the stick,” Stubbs said. “He pitched a fantastic game. He just caught a rough break.”

Jay Bruce also had a three-run homer for the NL Central-leading Reds, who dropped the defending champion Brewers 8 1/2 games back, matching their biggest deficit of the season.

Arroyo was aware of his no-hitter from the fifth inning on. So were the Brewers, who heard the 32,986 fans cheering a little bit louder with each out they made.

Arroyo’s no-hit drama ended abruptly. He walked George Kottaras with one out in the eighth, then gave up a double by Taylor Green — in a 1-for-22 slump — that landed just inside the right-field line.

“Probably by the fifth inning, you see the zero up there and you really want to get one,” Green said.

Corey Hart had a pinch-hit double that cut it to 3-2, and Norichiki Aoki singled to tie it and end Arroyo’s outing.

“Bronson threw a heck of a ballgame,” Reds manager Dusty Baker said. “That’s how it goes sometimes. I’ve seen guys lose a no-hitter, and then you try and save the ballgame.”

Sean Marshall (2-3) escaped the threat, and Aroldis Chapman struck out three in the ninth for his ninth save in 12 tries, celebrating the three-hitter with a pair of somersaults in front of the mound. Chapman had blown two of his last four save chances by giving up homers.

Not what the Brewers cared to see. Green was on deck at the final out, but said he didn’t notice Chapman’s forward rolls.

Arroyo recovered from one of his worst starts — only four innings in a 7-1 loss in Cleveland last Wednesday. He got several impressive defensive plays behind him to keep his no-hitter intact into the eighth.

The futility felt familiar to the Brewers, who had been held to one run in three of their last four games. Their last nine losses have come by two runs or less.

Milwaukee’s Marco Estrada returned from the disabled list and fanned a career-high 12 batters in six innings, but gave up Bruce’s 17th homer in the sixth.

For the second night in a row, a pitcher set a career high in strikeouts at hitter-friendly Great American Ball Park. Cincinnati’s Mat Latos fanned 13 in a 3-1 complete-game victory in the series opener on Monday.

Estrada had been on the disabled list since May 24 with a strained right thigh. He made two rehab starts at Triple-A and came back as sharp as he’s been all season.

The right-hander fanned Zack Cozart on a 91 mph fastball to open the Reds’ first inning, and kept going. He struck out six of the first nine he faced, and had 10 strikeouts — a career high — through only five innings.

Estrada gave up a double by Joey Votto in the sixth, a single by Brandon Phillips and Bruce’s drive, which made it 64 consecutive games at Great American with at least one homer. It’s the longest such streak since Coors Field had 80 straight game with one from 2002-03, according to STATS LLC.

NOTES: Zack Greinke starts the final game of the series for Milwaukee against Homer Bailey. … Dr. Henry Heimlich presented a life-saving award to Reds 3B Todd Frazier before the game. Frazier saved a choking restaurant patron during a series in Pittsburgh last month. … Brewers RHP Shaun Marcum felt better during a throwing session on Tuesday. Marcum has been on the 15-day DL since June 15 with tightness in his right elbow. Manager Ron Roenicke had hoped that Marcum could be activated and start on Saturday, but decided that’s no longer an option. Marcum had some discomfort while throwing on Monday. … Cincinnati’s last no-hitter was Tom Browning’s perfect game against the Dodgers on Sept. 16, 1988.

WASHINGTON (AP) — Playoffs and tournaments long have determined champions of every college sport from baseball to bowling. The exception... read more