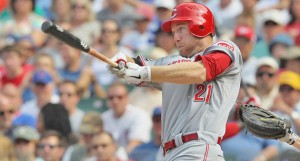 Cincinnati’s Todd Frazier had a double, triple and two RBI as the Reds beat the Pittsburgh Pirates 8-1 on Tuesday, a day after using the Heimlich maneuver to save a man choking in a local restaurant. (The Ironton Tribune / MCT Direct Photos)

PITTSBURGH (AP) — If the whole baseball thing doesn’t work out for Todd Frazier, he may have discovered a second career as an emergency medical technician. Or maybe a lifeguard.

The Cincinnati Reds third baseman had two hits and drove in two runs during an 8-1 win over the Pittsburgh Pirates on Tuesday, less than 24 hours after saving a local restaurant-goer from a serious medical emergency with some quick thinking.

Frazier and teammate Ryan Ludwick were eating dinner on Monday night when they noticed a customer across the room struggling to breathe. Frazier leapt into action, jumping behind the man and using the Heimlich maneuver to dislodge a sizable piece of meat.

“I don’t know what it was — it was a monster piece,” Frazier said. “The lady he was with was crying, and it was like surreal. Never done it before in my life.”

The customer recovered, thanked both players then picked up the tab without realizing either played for the Reds.

Considering the way Frazier is slugging the ball, he may not remain anonymous for long.

“He was … not Superman, he was Mr. Magnificent or somebody,” Cincinnati manager Dusty Baker said.

Cincinnati starter Homer Bailey (4-3) wasn’t too bad either. He gave up one run on four hits, walking one and striking out four while pitching his second career complete game.

“He’s been getting progressively better every outing,” Baker said of Bailey. “He had great command of his fastball, and he threw some outstanding breaking balls and changeups and he minimized his pitches.”

“We spotted (Bailey) some runs early, and we kept adding on,” Baker said. “A big thing tonight was Homer and the second thing was the fact that how we hit with runners in scoring position. This is the best night we’ve had in a while.”

Pittsburgh’s Charlie Morton (2-6) struggled with his trademark sinker and the Reds took advantage by knocking him around soggy PNC Park following a nearly 2-hour rain delay.

The Pirates were looking for their first five-game winning streak since September 2010 but faltered on a night Morton took another step backward.

Back at work later on Tuesday, Frazier and the rest of his teammates made quick work of the Pirates and Morton.

The right-hander enjoyed a breakout season last year, posting a career-high 10 wins and dominating the Reds. Morton went 3-0 with a 0.93 ERA in four starts against Cincinnati a year ago, including a five-hit shutout.

Those numbers are long gone. Morton lost for the fifth time in his last six starts and fell to Cincinnati for the second time in three weeks. The Reds tagged him for five runs in six innings during a loss on May 6 and quickly jumped on Morton again.

“I think some of it is pitch selection, but the majority of it was execution,” Morton said. “I feel like I need to get back to where I’m in a groove and the ball is coming out decently when I throw it.”

Cincinnati took a 2-0 lead in the second behind back-to-back doubles by Bruce and Frazier, and extended it to 4-0 two innings later thanks to some lackadaisical Pittsburgh defense. Bruce led off with a double and Frazier followed one batter later with a shot to the gap in left-center field.

Pittsburgh left fielder Jose Tabata jogged after the ball as it rolled to the wall, where it was eventually run down by Andrew McCutchen, who fired a relay to shortstop Josh Harrison. Harrison tried to gun down Frazier at third but the ball sailed over the Pirates dugout and Frazier trotted home.

It was all the run support Bailey required. The Pirates only managed one extra-base hit — a two-out triple by McCutchen — and never threatened to move over .500 for the first time since the third game of the season.

The Reds, who were stopped cold by Pittsburgh’s James McDonald on Monday following a 6-1 homestand that vaulted them into first-place, bounced back by flexing some muscle.

Cincinnati drilled five extra-base hits while continuing its offensive deluge. The Reds have scored at least six runs in five of their last 11 games. The Pirates, baseball’s lowest scoring team, have reached that number just four times all season.