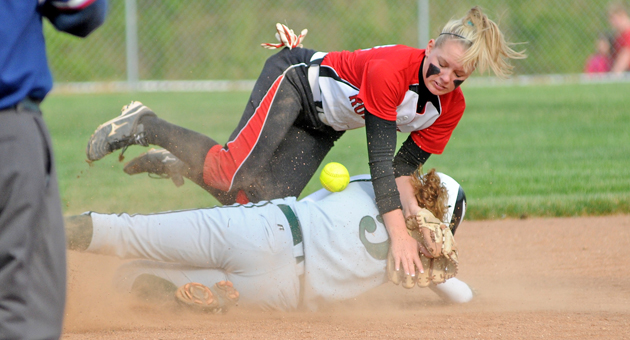 PEDRO — This game had a little of everything. And it had just the right things for the Rock Hill Redwomen.

Sami Nixon pitched well and Chelsea Harper had the game-winning run batted in as Rock Hill beat the Fairland Lady Dragons 2-1 in nine innings on Wednesday to clinch at least a share of their second straight league title.

“It was an exciting game. Both teams played outstanding. It was one of the best ballgames I’ve seen played,” said Rock Hill coach Mary Jane Harper.

“Sami pitched fantastic and we got the clutch hit. We played good team ball. It was a team effort.”

With the win Rock Hill clinches at least a share of the OVC title at 8-1. Overall the Redwomen are 14-5.

Rock Hill can win the league outright with a win at home on Friday against South Point.

“We got one of our goals. Now we just want to go Friday and play good ball,” said coach Harper.

Rock Hill took a 1-0 lead in the third inning when Lindy Simpson doubled, took third on a wild pitch and scored on a sacrifice fly by Brooke Eastham.

Fairland tied the game in the fourth on a double by Chelsey Stanley, Jaimie Phillips’ sacrifice bunt and Mackenzie Riley’s base hit.

However, Harper came through with a clutch singled to score Kingery with the winning run.

NFL teams will focus on needs, not athletes

By JIM WALKER Tribune Sports Editor   Will it be needs or best athlete? That’s the question for NFL teams... read more