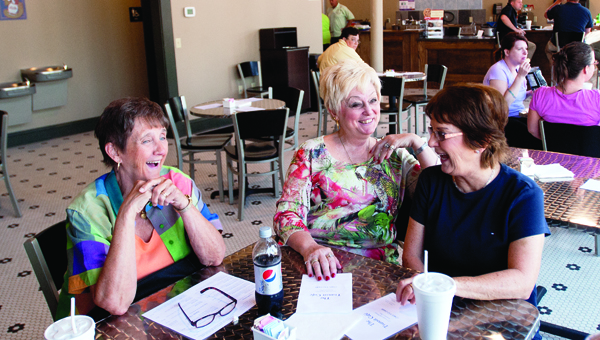 If you’ve driven by the transit center on Second Street in downtown Ironton recently, you may have noticed some new life bustling in the Berg Building.

The new life, The Transit Café, was made possible through a partnership between two local agencies that took a chance on the ultimate win-win business scenario.

In the spring of last year, the Ironton-Lawrence Community Action Organization approached Tri-State Industries Inc., about running a café in the transit center.

Mike Payne, director of public transportation in Lawrence County, said CAO’s relationship with TSI was already a good one, but the café project has turned into a great collaboration of the two agencies.

The Project and Partnership

Construction on the transit center began in 2010 and involved restoring and renovating the historic Berg and Brumberg buildings along Vernon Street between Second and Third streets.

The $1.3 million project, which was paid for with stimulus and Federal Transportation Administration funds, transformed the buildings into a hub for Lawrence County’s public transportation system.

The project also included public restrooms, an informational booth and a café.

CAO would lease the space for the café, but it wanted another agency to handle general operations.

“When we originally talked about it,” Payne said, “we were just going to have a coffee shop. It grew from there and turned into a deli type of environment. … There is a lot more to it than the original concept.”

It took about a year of planning, meeting with contractors and historical agencies to get the doors open.

Throughout the process, Payne said TSI was closely involved with the planning stages and took ownership of what would become their café.

“This is our first business we’ve opened out in the community,” Tackett said.

Revenue made from the café goes directly back to TSI to provide funds for its programs.

TSI works to provide employment opportunities for the county’s developmentally disabled adults. Adults have found employment with various businesses like Dow Chemical and Cintos, but the Transit Café is the first TSI-managed business in the county.

Tackett said the café allows TSI to get disabled adults into an environment where they can cater to their individual needs and allow adults with higher levels of disabilities to get into the workforce to train.

Jason Kinder, community employment specialist for TSI, said the partnership with CAO couldn’t be better. Kinder has also been heavily involved with the café and its day-to-day operations.

“This could lead to more projects in the future,” Kinder said. “It has been fantastic.”

Currently the café has a staff of four, which includes two managers, Alex Fairchild and Ann Wilson, and two TSI employees, Brenda Wolfe and Larry Mader.

In employing adults with disabilities, Tackett said it is sometimes difficult.

“The biggest issue is people only see the disability and they don’t see the upside,” he said.

Right now, TSI has about 25 adults with disabilities employed with other companies. There is also another 15-20 who are employed through contract services.

Mader, 53, works at the café and said even though there hasn’t been much advertising of the café yet, lunch times have been pretty steady.

Mader said he would tell people to give the café a try, because it is a good opportunity to help out Tri-State Industries.

Mader, as well as Wolfe, are training, not only to work in the café and prepare the food on its menu, but to train to leave the café and seek employment elsewhere.

Kinder said the café allows the disabled adults to work in a field that TSI hasn’t been able to offer before.

“Our goal is not for them to stay here,” Kinder said. “They will work and learn the skills they need to go out and find another job. … One where they will mix their own sauces a and cut their own vegetables.”

What you’ll see and eat

The café offers a classic, yet modern appearance with a bright atmosphere.

Through the partnership with CAO, The Transit Café was able to have the assistance of a chef to build a menu.

The CAO’s new head chef, Keith Taylor, has a gourmet cooking background with the Blackhawk Grille in Barboursville, W.Va., and a training background through his work with the Outback Steakhouse company.

Not only did Taylor take the reins with the CAO’s senior meals, but he also “took the bull by the horns” and created a menu for the café and helped train the staff, Payne said.

Kinder said the goal of the menu was to offer healthy, fresh food with quality meats and fresh produce.

Other sandwiches include a horseradish seasoned roast beef, mufaletta, BBQ pulled pork with southwest slaw and an Italian hero.

Soups are made from scratch. Recent offerings have included clam chowder, minestrone, lobster bisque and roasted red pepper with smoked gouda, which is already a favorite of customers, Kinder said.

There are also salad options and a child’s menu. Breakfast items such as muffins, bagels and coffee are also offered.

Currently, the café is open from 7 a.m. to 5 p.m. Monday through Friday, but Kinder said there are plans to expand hours and also to incorporate a delivery service.

The Transit Café also has a Facebook page, which lists the soup of the day.