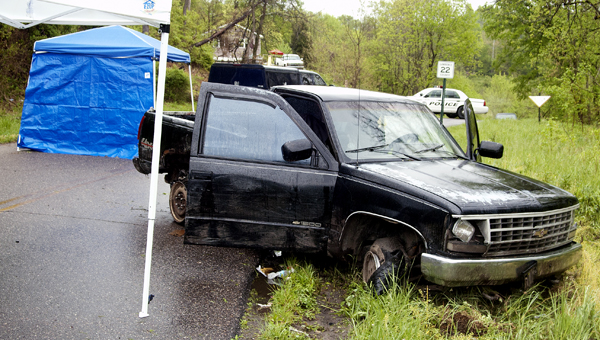 A black Chevy truck rests with his tires blown out alongside a ditch across from the Lawrence Street Apartments in Ironton Saturday.

“Our officers were advised of a pursuit involving the Raceland Police Department,” Ironton Police Detective Chris Bowman said. “Our officers assisted them when the pursuit went across the Ironton-Russell Bridge.”

It is Bowman’s understanding the chase began originally over an alleged DUI incident. When the 1990 Chevy pickup that Morgan was driving went off the right side of the road, officers allegedly found a mobile meth lab in the vehicle.

“When he wrecked, he tried to run over the officers,” Bowman said. “He had it in reverse to run them down.”

Ohio charges that Morgan is facing include three counts of felonious assault, possession of meth amphetamine, illegal assembly or possession of chemicals for manufacturing of drugs, resisting arrests and failure to comply, according to Bowman.

Morgan was taken from the scene to Our Lady of Bellefonte Hospital. The man also faces charges in Kentucky and is expected to be taken to the Greenup County Jail, Bowman said.

Never too late to become a college grad

To say Clell Elliott has seen a lot in his 89 years on this planet is an understatement of the... read more