Ironton vs. Gallipolis battle of 3-1 teams 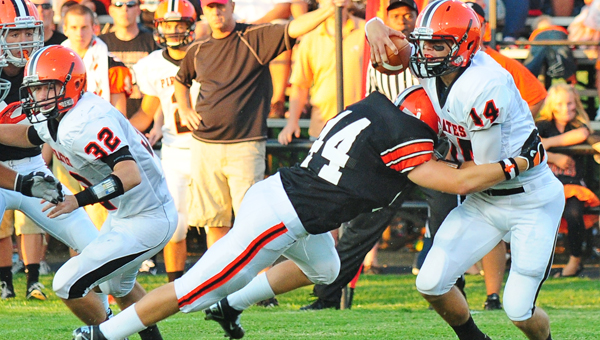 There’s a lot more similar about the Ironton Fighting Tigers and Gallipolis Blue Devils than just their records.

Both teams come into the game 3-1 and they’ve done it with power running games that feature similar formations.

“They’re like to line up and run at you a lot like Russell,” said Ironton coach Bob Lutz. “They’ve got a big, strong fullback and an athletic quarterback who can run or throw. They’ve got some size and they always have good athletes at the skill positions.”

“All their backs run hard and they’re all athletes who can catch the ball,” said Lutz.

“All their receivers have good hands and good speed,” said Lutz.

In a 31-8 win over Marietta last week, the Blue Devils had 300 total yards by halftime and nearly half came through the air.

“Everyone thinks they’re one dimensional, but they can hurt you with the pass if they need to,” said Lutz.

“They’ve got pretty good size and they use it to make their running game go,” said Lutz.

The strength of Gallipolis has been its defense. In their only loss, they held the Athens’ offense in check before losing in the closing minutes 15-10.

Zack Tackett (5-11, 195) and Moss at the ends and Austin Gragg (6-0, 250) and Guisinger at the tackles lead the defense and make it hard for opponents to run the football.

“They’re a solid group and they move well to the football,” said Lutz.

The secondary is comprised of Clagg at the free safety while Taylor is one corner and Bailey and Russell share the other spot.