SOUTH POINT — Friday wasn’t only the first day for students in the South Point Local School District, but also a new administrator at Burlington Elementary. 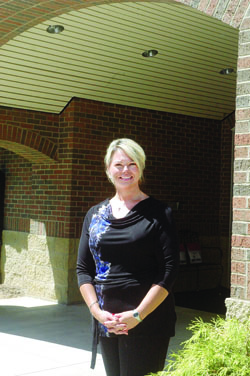 Since taking the reins after the retirement of Henrietta Kitchen, Bentley said it will be business as usual at Burlington Elementary, but she has brought with her a new positive behavior program to boost stewardship among students.

Started at South Point Elementary, Bentley’s Pointer Pride Program is a way to start a dialogue with parents and teachers and also to give students ownership of their school.

“In order to achieve academically, we need to bring awareness to good behavior,” Bentley said.

Each day, teachers fill out the student’s “how I act” card, which notes the student’s work, attitude, care of property, habits and so forth, which is to be signed by a parent every day. At the end of the week, students who have demonstrated a positive behavior everyday, enter a raffle to win fun rewards.

One of the most popular rewards has been the “royal chair.” With this reward, students get to use a comfy office chair in their homeroom.

“They are so excited to get the royal chair,” Bentley said.

Other rewards include being an office assistant to help the secretary at the end of the day, drawing a mural on the front door windows to be displayed for one week, homework forgiveness passes, jump to the front of the lunch line, leading the morning Pledge of Allegiance and helping water plants and feeding the bird and squirrels.

Bentley said the Pointer Pride Program made a big different at South Point Elementary and cut down on office referrals. She also said the program sets expectations for the students and helps them become better citizens.

“On the first day of school, I went to each classroom and talked to the students,” Bentley said. “I spent about 15 to 20 minuets in each room telling them what I expect of them.”

South Point Superintendent, Ken Cook, said he was confident that Bentley would be positive for the school.

“She will bring some new energy and new excitement into the building,” Cook said. “She’s really very much student-oriented.”

Cook said enrollment at the district appeared to hold steady this year.

He also said the focus for the district this year would be to improve instruction and test scores.