A smile crept across Brooklyn Blakeman’s face as the auctioneer announced the bids on her market chicken. 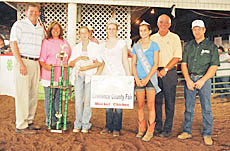 “It’s good,” Blakeman said of the sale price. The youth said she’d probably save half the money for college and spend the rest on clothes for school.

Next to the auction block was reserve champion Brianna Schneider’s market chicken. The chicken was purchased for $750 by Damon Coffman.

“(I bought it) mostly because it’s a pretty chicken — and she’s my granddaughter,” Coffman joked. 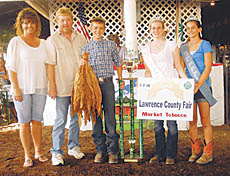 Whatever his reason, his granddaughter was happy with the results.

“That’s actually pretty good considering it’s my first and last time taking chickens,” Schneider said, adding that she’ll be in college next year and may not have the time to raise a chicken. The Symmes Valley FFA member is no stranger to 4-H activities, though she had never done the market competition before, she said. She became attached to the animals, she said, so she’s trying not to think about what will happen next to them.

“This has been a fun experience, especially considering 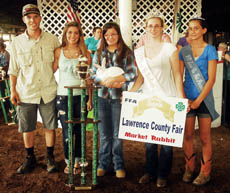 we did not have any chickens (before),” Schneider’s mother, Jeanne Schneider said. “They’re kind of addictive.”

In the tobacco division, grand champion Levi Cade’s plant went for $800 to Ray and Drema Ferrell of R&D Giovanni’s in Aid. Ray Ferrell said the business buys something every year at the auction.

In the market rabbit portion of the auction, Shelby 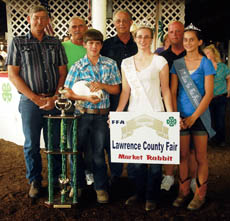 “It’s good,” Haas said. This was Haas’s third time with a grand champion, so she was used to high prices for her animals, she said.

Tyler Clyse said the business participated in the auction to support the fair. 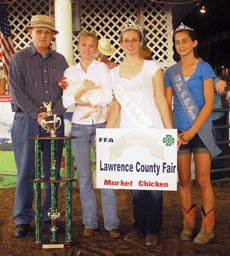 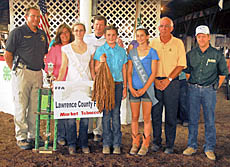 One-day seminar to be Sept. 16 at Shawnee State University

PORTSMOUTH — A one-day seminar “Do you have what it takes?” is scheduled at Shawnee State University giving participants tools... read more