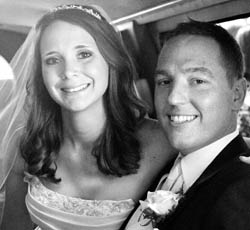 Amber Michelle Murnahan and William Lindsey Conway were united in marriage on Oct. 9, 2010, at St. Joseph Catholic Church in Ironton.

Will is the son of Emmett Conway, Jr. of Athens and Catherine Conway of McArthur. He is the grandson of the late Emmett Sr. and Myrtle Conway and the late S.R. Tate and Marjorie Cline.

Will is a 1995 graduate of Athens High School and a 2001 graduate of Southern Methodist University with a bachelor of science degree in economics. He is a vice president and CIO of Superior Hardwoods of Ohio, Inc.

They newlyweds honeymooned in Cabo San Lucas, Mexico, and are residing in Athens.

Julia and David R. Basham, of Franklin Furnace, would like to announce the marriage of their son, Nicholas R. Basham,... read more