Sisters star together in IHS musical 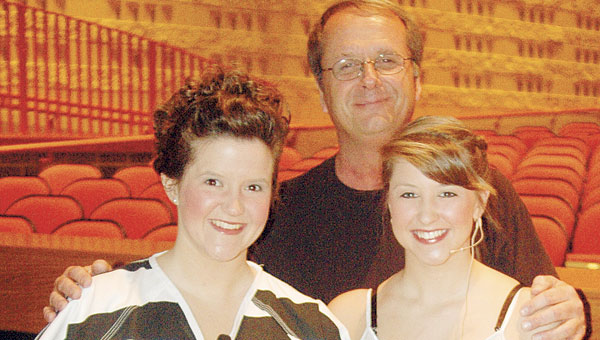 Proud father Tony Crowe is seen with his daughters Kelsey, left, and Abbie. Tony works his magic in the orchestra pit and his daughters landed two of the leading roles in the production of “All Shook Up.”

After spending hour after hour rehearsing for this year’s musical, the cast and crew of Ironton High School’s “All Shook Up” may consider each other family. For three of them, the production literally has been a family affair.

Sisters Abbie and Kelsey Crowe both have lead roles in the musical. Their father, Tony Crowe, plays percussion in the orchestra pit.

Though they have had disagreements, the sisters say they enjoy working with each other on the musical.

“She helps me a lot,” Kelsey said of Abbie. “I can take criticism better from her.”

This is the girls’ third year in participating in the school’s annual production. Both girls started with “The Sound of Music” production in their freshman and sophomore years, respectively.

“It’s fun to be someone you aren’t everyday,” Kelsey said of acting. “It’s fun to get into character and do something different.”

Both girls say “All Shook Up” is their favorite production yet.

“This one is more upbeat,” Kelsey said.

The musical, which is set in the 1950s and featuring the music of Elvis Presley, this year had even the toughest crowd — their fellow classmates — laughing.

“The characters are more their age,” Crowe said. “They can relate to it more.”

Even before high school, the girls watched the musicals at IHS. They tagged along with their father, who has been playing percussion for the shows since 1979.

“I just thoroughly enjoy it,” Tony Crowe said of playing the drums for the musicals. “I’d pay them to do that.”

The girls’ older brothers, Micah and Joseph, have been involved in the musicals too.

And while Crowe enjoys playing the drums for the musicals, nothing beats watching his daughters perform their roles.

“I’m really proud of them,” he said. “When they come out to their parts you’ll see me in the pit just beaming. It’s just a dad’s pride. They’ve worked hard at it.”

A South Point pharmacist is facing drug charges in Scioto County after he was stopped there for a traffic violation.... read more