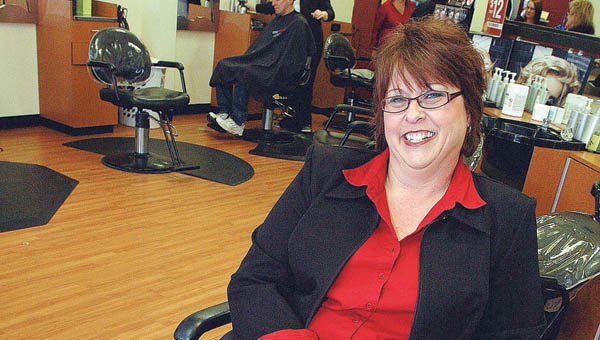 Kitts Hill native Rachel Russell has recently celebrated her 25th year anniversary at Fiesta Hair Salon, located at the Hills Shopping Plaza, in Ironton. Russell was surprised by her co-workers with balloons, flowers, cake and a pair of diamond earrings.

Studies by the Bureau of Labor Statistics have shown that from age 18-44, a person will likely have 10 different jobs.

Kitts Hill native Rachel Russell has spent every day since she graduated high school doing what she loves, and on Wednesday, her co-workers showed their appreciation for her 25 years of service.

Russell, a hair stylist at Fiesta Hair Salon in Ironton, was surprised with balloons, flowers, a cake and even a pair of diamond earrings from the company.

If you’ve drive by the Ironton Hills location, you’ve probably seen the huge sign congratulating her.

“We did that as a company for her because she’s been here so long,” said Lola Bentley, area supervisor for the Ironton Fiesta location and nine other stores. “She’s, in my area, the one that’s been here the longest. She’s dedicated and I think she really loves her customers. You have to, to stay in the business that long.”

Bentley explained the hair salon industry has a high turnover for stylists. But Russell said she couldn’t see herself doing anything else.

“I just like people,” she said. “I like being around people. It’s different. You never know from day to day what we’re going to do. It continually changes.”

While Russell was a junior at Rock Hill High School, she started taking classes at Lawrence County Vocational School, now Collins Career Center. By the time she graduated high school in 1985, she was licensed to cut hair. She got her very first job with Fiesta Hair Salon in South Point and later transferred to the Ironton location in 1990 when it opened.

“This is all I ever wanted to do,” Russell said.

Lorrie Kingery, manager of the salon, said she graduated with Russell and has worked side by side with her for 20 years.

“I can’t talk about Rachel, I’ll cry,” Kingery said as she began to tear up a little. “I think that’s a wonderful thing to be in business that long with the same company.”

“I’ve worked with her for 20 years and I don’t think she’s ever called off of work,” Kingery added.

Russell also received a silver clock with an engraving that read, “Rachel, For 25 years of dedication.”

PROCTORVILLE — A tentative trial date has been set for a Proctorville man accused of throwing his toddler son against... read more