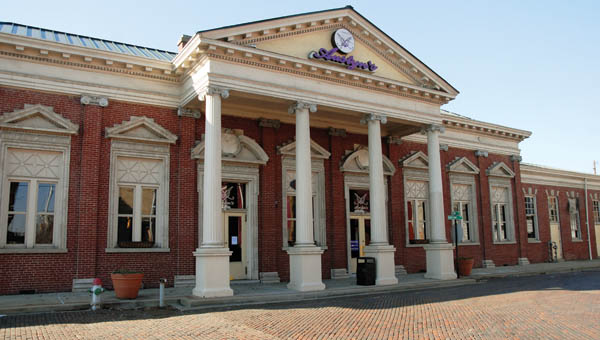 Only three years ago the former Norfolk and Western passenger train station was transformed into an upscale restaurant. 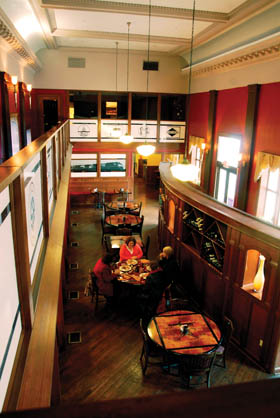 Dinners are seen enjoying lunch in the main dining hall at Austyn’s in downtown Ironton.

At noon fresh snow covered the sidewalk in front of Austyn’s. Few footsteps had tracked through the white slush on the pavement near the popular upscale restaurant. Its massive double doors were locked. The neon “open” sign was turned off.

Last week Austyn’s had closed its doors in the former N&W railroad station. Now the restaurant’s owner is looking for someone to take over.

“The plan is hopefully I can find the right owner, sell it and let him run the restaurant,” said Phi Chen.

It was mid-December on an early winter afternoon that three enthusiastic Christmas shoppers were out for a late, late lunch at the restaurant. That was the peaceful time before evening diners would start to take over, when executive chef Matthew Hall could take a breath.

But not for long. Soon it would be show time all over again and Hall would be back to multi-tasking, a role that came from offering an eclectic, ambitious bill of fare.

Only three years ago the former Norfolk and Western passenger train station was transformed into an upscale haunt for ambitious palates in a casual atmosphere.

“We wanted to stay with the railroad theme,” Hall said last month. “We thought that fit the setting best.”

Chen opened the Ironton Austyn’s after starting a similar restaurant in Marietta, another Ohio River town, more than 10 years ago, also in an historic building.

Mahogany booths by a wall of windows were designed to resemble the seats in a dining car. A freestanding floor-to-ceiling wine rack used to partition off the front of the restaurant was created to look like an old ticket booth. It was a transformation that may have seemed ambitious at first, taking almost nine months to complete.

“When I first came in, you could see from one end to the other,” Hall said.

And like those trains of that bygone era that took passengers on faraway journeys, Austyn’s menu was focused on exploration, gourmet-style. It offered a menu with Asian, Italian, Modern American and French influences.

“There’s a lot of Asian influence,” Hall said. “Asian vegetables in a medley with little breaded pieces of chicken tossed with a sweet and sour sauce.”

Or roasted duck breast with cranberry reduction glaze or rack of lamb or grilled portabellas on focaccia bread brushed lightly with mayonnaise dressed with balsamic vinegar.”

Hall met Austyn’s owner when the former was in high school, about the time he decided to pursue a career as a professional chef.

Now that owner is citing his responsibilities at his first restaurant at Marietta as keeping him from managing the Ironton location as he would like.

He has had a couple of potential buyers express interest, but there has been no firm commitment.

“If I don’t find a buyer in the next few months, I will probably re-open it up,” Chen said. “Maybe change the theme a little bit. The same concept, but probably change the menu.

“We catered to people around Ironton, a lot of Ashland people and the surrounding area. We really like the building and location. This building is great. There are three private rooms for private parties. We used those rooms a lot.”

Austyn’s wasn’t the first time for the old station to play restaurant. In the 1980s there was The Depot. That was followed a few years later with Manzetti’s, a pizza and spaghetti place.

Now the future of Austyn’s depends on when, and if, Chen can find someone to give the restaurant the same attention he believes it deserves.

“It was just hard for me to run the restaurant the way I’d like it to be,” Chen said. “Hopefully someone would be in a better situation.”