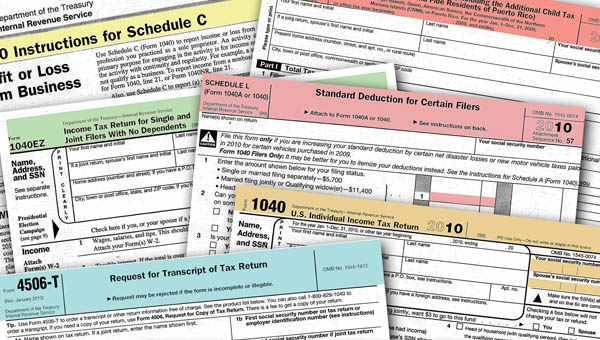 This year the Internal Revenue Service, will not mail out tax forms as it has in past years. Tax filers can now download forms from irs.gov.

It may be the beginning of a new year, but soon, people around the country will look back to 2010 for the annual ritual of filing their income tax returns.

One part of the familiar ritual has changed, however. If you are waiting for your paper forms and instruction booklets to arrive in the mail, the Internal Revenue Service said they have curtailed the old tradition of the January mailings to save money.

The IRS announced last September that the agency would no longer mail out paper forms and instructions to tax payers due to the increasing popularity and ease of filing income tax returns online. The agency said it planned to save about $10 million a year in paper and printing costs as well as postage.

Ironton’s Postmaster General, Dave Manring, said he has seen a decrease in people making a scramble for the April deadline since he took the position in 2004.

“We don’t have as big a push around the 15th of April,” Manring said. “The past few years it has dropped off quite a bit.” He said not as many people come in at the last minute and there are no long lines out of the door.

He also said he doesn’t expect the new paperless method to really affect the post office.

“I know last year we didn’t receive a lot of tax forms from the IRS either,” Manring said. “Since they’ve pretty much gone to having people do the electronic filing, it has slowed things down here so we don’t have as many paper returns coming through.”

Manring said the post office has not planned to extend its hours on April 15 at this time.

For those who cannot file electronically, paper forms are still available by request. The Briggs Lawrence County Library currently has instruction booklets for the 1040-EZ forms. Lori Shafer, adult services librarian, said the library is expecting other booklets and forms to arrive anytime, but it may take a while.

“Last year it took months for them to come in,” Shafer said.

The forms and booklets can also be downloaded from IRS.gov. The agency will also mail the forms if requested.

Stephen Thompson, public accountant and tax preparer at Thompson Financial Services in Ironton, said one of the reasons the IRS isn’t mailing the paper forms is because preparer like him don’t need them.

“We generated all the forms we need,” Thompson said. “If somebody brought in a 1040 booklet, it would just go to the garbage. I wouldn’t need it.”

Thompson said he believes that as time goes on, the IRS will phase out all paper mailings.

“It’s all going to be web based for you to go on and get your forms and or you’re either going to purchase tax software, or you’re going to go to a tax preparer who has the software,” he said. “The IRS is trying to train everybody, they want you to do it online.”

Thompson agreed that the days of filing taxes the old fashioned way are coming to an end, but said it is not necessarily a bad thing as long as people know how use the technology.

“A lot of people don’t welcome change, but I see the future of the Internal Revenue Service as being an online business,” he said. “That’s what it’s coming to. Eventually, it’ll come to a point down the road that it will be mandated that you e-file. They will not accept a paper return.”