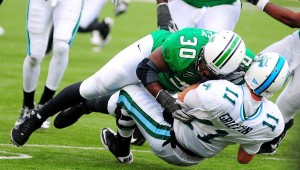 HUNTINGTON, W.Va. (AP) — Senior quarterback Brian Anderson threw for two touchdowns and Marshall jumped out to an early lead to beat Tulane 38-23 on Saturday in the season finale for both teams.

Anderson, who finished with 162 yards passing and one interception, connected with senior Courtney Edmonson on a 20-yard touchdown to give the Thundering Herd (5-7, 4-4 Conference USA) a 14-7 lead in the second quarter.

The Thundering Herd pushed their lead to 28-7 after Kevin Perry scored off a blocked punt and Anderson threw a 19-yard touchdown pass to Tron Martinez.

The Green Wave cut the margin to 14 points with 8 seconds left before halftime when Ryan Grant caught a 12-yard pass from Ryan Griffin and it was 28-14.

But Marshall returned the kickoff to the Tulane 31 and a 15-yard late hit at the end of the play moved the ball to the 16 where Tyler Warner kicked a 33-yard field goal on an untimed play and the Herd led 31-14 at the break.

Tulane (4-8, 2-6) could get no closer and Rashad Jackson’s 84-yard interception for a score for Marshall opened up a 38-14 lead in the second half.

Griffin was 36-for-64 for 370 yards and threw three interceptions.

The win marked the final game for 19 Marshall seniors who turned in some memorable performances.

Senior linebacker Mario Harvey had a career-high 21 tackles that included nine solo stops and 12 assists. He also had five pass break-ups, three tackles for a loss, two sacks and one forced fumble.

Senior Chuck Walker also had a touchdown catch. It was his first TD reception of the season.

Marshall junior deffensive end Vinny Curry added a half sack to bring his season total to 12, tops in Conference USA. He is tied for the sixth most single-season sacks in a Herd uniform, tying William King and B.J. Cohen.