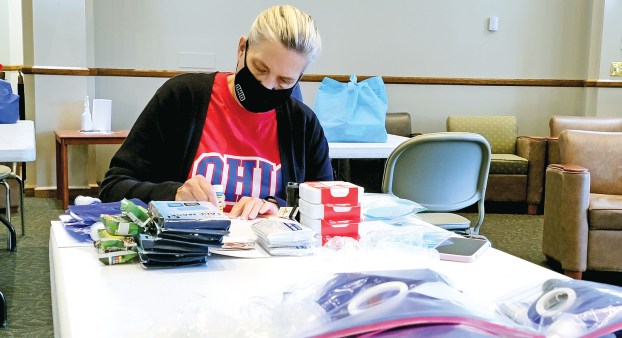 Items that are included in the United Way of the River Cities family emergency preparedness kits that volunteers at Ohio University Southern assembled on Thursday. They put about 50 kits together. (Ironton Tribune | Mark Shaffer)

It was not the usual gathering at the Rotunda at Ohio University Southern.

While it is used for many events from dinners to award ceremonies, on Thursday afternoon, it was mainly tables of items that around a dozen people would assemble into a plastic bag and along with a written note of encouragement.

The goal was simple, assemble a basic emergency kit for people in their time of need.

The event was put on by the United Way of the River Cities and was part of a larger effort, done in connection with many other United Way agencies across the U.S. as part of their remembrance of the 9/11/2001 attacks.

Sarah R. Short, the resource development associate for United Way of the River Cities, said it was the largest service project that the United Way has undertaken.

“There are over 4,000 people working to make emergency preparedness kits,” she said. The kits will be going to those who are experiencing homelessness or are going into homes for the very first time. There is a lot of stuff in there.”

She said their goal was to get around 50 of the kits ready to go.

The kits include a flashlight with a battery already installed, a plastic water bag with a screw cap, a mini first aid kit, facemasks, a thin thermal blanket and a cardboard insert that explains what every home should be stocked with in case of an emergency. Each kit contains a handwritten card with a positive message written by the person who assembled the kit. It also contains a card for 211, which is an emergency number for people in need of help.

The kits will go to people in Lawrence County and four counties in West Virginia that United Way of the River Cities serves.

Brent Sturm, a volunteer engagement coordinator for United Way of the River Cities, was playing the master of ceremonies for the event.

He said the goal was to get people together, not just to remember 9/11 attacks, but to “try to recapture some of that unity we had in our neighborhoods back then. Part of it is helping low-income families prepare for emergencies. Everybody will have an emergency, no matter your income, but we know from research that the lower the income of a family, the less likely they are to have an emergency response plan.”

He said that a lot of the kits will go to families that have been rehoused from having been homeless.

“So you can imagine, of all the things you have to do in getting a house, something like a flashlight is not on top of the list,” Sturm said.

He said the United Way of the River Cities was going to have five really big events on 9/11 but the surge of Delta variant COVID-19 cases made them scale back their plans to smaller, socially-distanced groups. The United Way of the River Cities also dropped off the items for the kits at 14 local businesses who will attend a virtual version of the event as they assemble the kits.

One of the volunteers at Ohio University Southern was Michelle Goodman, OUS’ coordinator of campus communications and external relations, was assembling kits because “I wanted to something to help out. It seems like a small commitment of my time for something that could vitally help somebody in need.”

Another volunteer was Suzi Bloomfield, an administrative services associate in the Dean’s office, who was there “because I thought it was a good cause. I like to help out and serve the community in any way I can.”

Bloomfield was gluing drawing of various items like piggy banks, flashlights and medical kits to orange cards to make a matching game for kids.

She also liked the idea of helping those she may not ever meet or know.

“You never know who you are helping when you do something like this,” she said. “It is just knowing that you are providing a service in a time of need. Maybe it will put a smile on a kid’s face or fill a family’s need.”