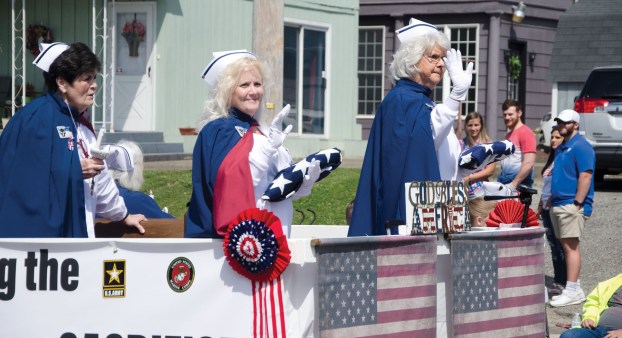 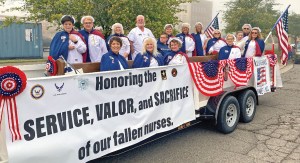 Nurse Honor Guard pays tribute to those in their profession

ASHLAND, Ky. — Since its founding in 2019, the Nurse Honor Guard of the River Cities has made its mission to pay tribute to those who dedicated their lives to providing care.

Based out of Ashland, the nonprofit group has attended more than 50 funerals of registered nurses, nurse practitioners and licensed practical nurses in Kentucky, Ohio and West Virginia.

Maria Oakes, who founded the group with Dorothy Spillman, said it began about four years ago when she was asked by the daughter of a nurse to do honors at her funeral.

Oakes said three of them responded and put together a tribute and from there they began asking around for help in starting up the 501(c)(3) organization.

Founded with 12 members from a retired nurses mailing list, who now serve as the executive board, the group now numbers more than 40 and do honors at funerals throughout the Tri-State.

“We pay respect to those who demonstrated care for the vulnerable,” she said. 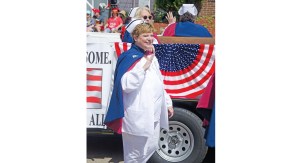 Gail Hunter, of the Nurse Honor Guard of the River Cities, waves to the crowd during the 2021 Ironton-Lawrence County Memorial Day Parade. (The Ironton Tribune | Heath Harrison)

Oakes, who works at Cabell Huntington Neonatal Intensive Care Unit, says most of their members are active nurses and participation varies with shift work and family commitments.

The group was especially visible last week in Lawrence County, with a float in the 153rd Ironton-Lawrence County Memorial Day Parade. They also attended the dedication ceremony for two headstones of Black Union veterans of the Civil War at W.D. Kelly Cemetery in Ironton, where they laid a wreath in honor of the two men.
Oakes said the group began meeting at Miller Funeral Home and First Christian Church, then First Presbyterian Church in Ironton. Their monthly gatherings now take place at the VFW on 20th Street in Ashland.

Oakes said they are in contact with funeral homes in a 50-mile radius of Ashland and Spillman checks the obituaries regularly for nurses who have passed.

When they attend a funeral, she said they first introduce themselves, offer a prayer and explain the purpose of the group — to honor nurse who have devoted their lives to others.

She said they then read the name of the nurse and read the Nightingale Tribute, named for Florence Nightingale, the 19th century “Lady with the Lamp,” who is recognized as the founder of modern nursing.

Oakes said they then ask if any other nurses are present, who are recognized, then a bell is rung and a rose is placed on the casket.

Afterward, a ceramic lantern is presented to the nurse’s family.

“We just do what the families want us to do,” Oakes said of the ceremony, which takes about seven minutes.

She said the group has traveled as far as Lincoln County, West Virginia, Lexington, Kentucky and Marshall, Illinois for services. 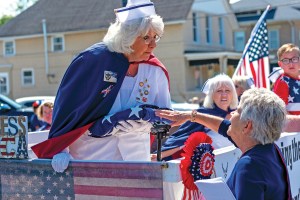 Oakes said the group’s activities were slowed during the COVID-19 pandemic, in which many families opted for no service or small gatherings, but the group continued to meet via Zoom and took part in activities such as mask making, volunteering at vaccine clinics and donating to food pantries.

She said the group has three Facebook pages, maintained by member Rita Weese. One for its executive board, one for members and one for the friends and the public.

“Every meeting, forum and commitment we do is on there,” Oakes said.

She said the group, which is not affiliated with any hospital, is always looking for new members, who can join for $5 a month in dues.

She said they are planning a popcorn sale and cookbook in the near future as fundraisers as well.

For more information on the cookbook or the group, or to make a donation, the group can be visited on Facebook, or contacted at Nurse Honor Guard of the River Cities, P.O. Box 921 Ashland, Kentucky 41105.

Oakes also asked that family members who would want a tribute at a funeral to contact the group. 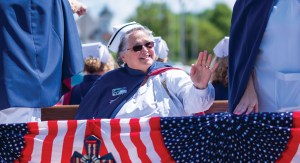 Sheila Cornett, of the Nurse Honor Guard of the River Cities, waves to the crowd during the 2021 Ironton-Lawrence County Memorial Day Parade. (The Ironton Tribune | Jermey Holtzapfel)