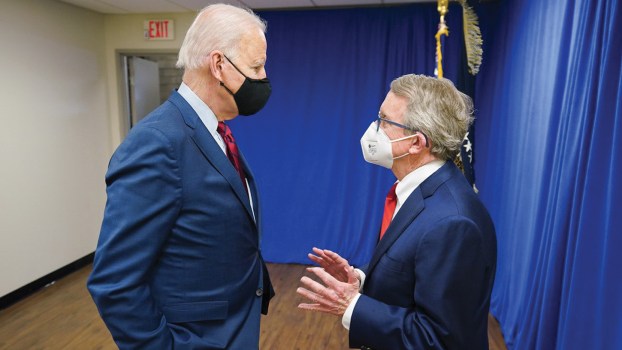 President Joe Biden meets with Ohio Gov. Mike DeWine on the COVID-19 pandemic during a visit to Columbus on Tuesday. (White House photo)

Governor met with president on Tuesday

COLUMBUS — Ohio Gov. Mike DeWine says that COVID-19 cases in the state are beginning to plateau.

“Cases were dropping and have leveled out,” he said.

In 24 hours before the governor’s news conference Thursday, the Ohio Department of Health reported 1,501 new confirmed cases of the virus and 67 hospitalizations.

“We’re really at a point now where our cases have plateaued,” DeWine said. “There is some indication the plateau is going up.”

DeWine, a Republican, also met with President Joe Biden, a Democrat, on Tuesday in Columbus regarding the pandemic.

“This afternoon in Columbus, I met with Ohio Gov. Mike DeWine to discuss our coordinated response to COVID-19,” Biden said in a post on Twitter following the meeting. “The virus doesn’t just impact red or blue states — it impacts us all — and I’m committed to working across the aisle to defeat it.”