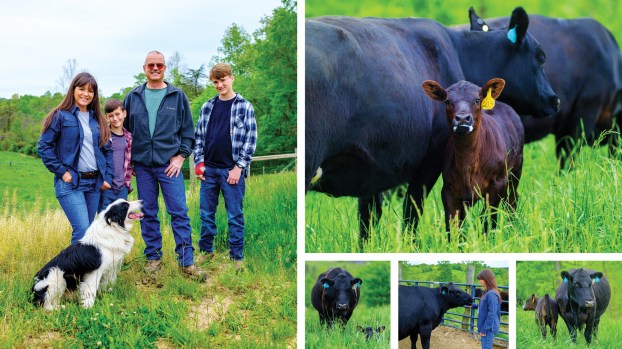 Double Shoe Ranch is owned and operated by veterinarian Walker and his family in South Point, providing local, grass-fed, high-quality beef to the community. (Photography by Jeremy Holtzapfel)

SOUTH POINT — Stephen Walker jokes that he isn’t a cow farmer, but is instead a grass farmer.

Double Shoe Ranch is owned and operated by veterinarian Walker and his family in South Point, providing local, grass-fed, high-quality beef to the community.

Walker said he has seen an increase in demand amidst the possibility of a meat shortage due to the COVID-19 pandemic.

“It really is unprecedented, we’ve had just all kinds of demand for beef,” Walker said. “We have plenty of cows, but you know, the slaughterhouses are backed up for months now.”

Each day that Walker calls the butcher to schedule in a cow for a customer, the butcher has already scheduled out another two weeks. The normal wait time around the spring, Walker said, is usually a month at most.

Now, new appointments are being scheduled for September.

The ranch sells beef in full, half, quarter and one eighth sizes at $100 per eighth of a cow. They try to keep their prices as low as possible, Walker said, charging only what they need to keep afloat as a viable business.

Each purchase includes different cuts of beef. This includes ground beef, roasts and steaks, depending on the size purchased. A full cow can be cut to the customer’s specifications. Walker has had some customers request the full cow in the form of ground beef.

Double Shoe Ranch’s cows eat a diet of well-developed grass and roam in roomy pastures on the ranch’s nearly 1,000 acres.

Using his academic background in science, Walker studied the best farming practices, focusing on what was best for his land and cows.

In the last seven years, Walker said he has been able to get his herd through the winter with no hay whatsoever, using year-round grazing with pastures he has developed over the past 25 years.

Like his pastures, Double Shoe Ranch has deep roots. Having been in the family for three generations, it was first purchased by Walker’s grandparents in 1943, beginning with only 65 acres.

Walker’s father told him about the difficulty of making a living by farming, so Walker decided to also follow his childhood dream of                  becoming a veterinarian.

After receiving a degree in zoology, Walker took a break from academia, or so he thought, and began working at Ashland Oil after working there during a summer program for college students. He later received another degree in environmental chemistry.

He purchased his aging grandparents’ farm in 1973, 30 years after they originally bought it. Walker worked during the day and farmed in the evenings, but over time he felt called back to veterinarian work.

Inspired by his mother, who always loved her job, he decided it was time to pursue another career.

“I had always sort of had a dream of being a veterinarian in the background, and I finally sort of took a leap of faith and decided I was going to do it, because I’m getting too old, you know,” Walker said.   “I quit Ashland Oil and went back to vet school.”

Walker now works as a veterinarian and runs the farm with his wife and two sons. Although the schedule can be a bit crazy, Walker and his family enjoy the lifestyle and the work.

“It’s a good life, but there’s always something to do,” Walker said. “I’ve got spare time every day between midnight and three in the morning, and then we’re pretty busy. You know, we’ve been blessed though.”

By Taylor Burnette River City Leather offers an array of handmade leather bags and accessories online and at locations in... read more