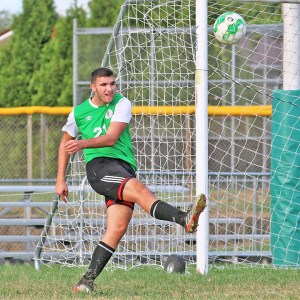 Fairland Dragons’ senior soccer standout Jacob Polcyn set a school record with more than 500 saves for his career. Now the duel sports standout is preparing for the basketball as the Dragons hope to return to the regional tournament and a possible state berth this season. (Photo By Tim Gearhart)

PROCTORVILLE — Jacob Polcyn did not only have himself a great career on the soccer field, but he also has a great career to finish on the basketball court for the Fairland Dragons.
Polcyn and his teammates were in the elite eight last season when the season was cancelled and unfinished due to the COVID-19 virus.
He has been hurdling the challenges of the virus as a high school athlete ever since.
“I thought that we had a pretty normal season aside from the attendance restrictions,” the senior goalie said of this past soccer season.
“The only place where COVID hurts us was the summer. We couldn’t really do any contact drills or have pre-season games, which put us in a bad position to start the season as we had a few inexperienced guys in the starting lineup.”
Despite the challenges, Polcyn was able to put up a school record 545 career saves. That is top 30 in the state of Ohio for career saves in soccer. This is a huge accomplishment for a program that is trying to get established as Fairland only started its soccer program in 2015.
Polcyn is still anxious to get back on the court as he said, “I just want to get back to that elite eight game” when asked about basketball.
The 6-foot-3 forward/center averaged 12 points and 7 rebounds per game to help lead the Dragons to a 24-2 season last year.
Polcyn was also playing some of his best ball of the season last year when the season was ended with him averaging 19 points and 10 rebounds at “The Convo.”
Fairland will look to make their way back to that elite eight game as they return their top 10 rotational players from last year.
Polcyn acknowledged the expectations and said, “The goal is definitely the same: win a state championship. I feel like this year’s potential exceeds last year’s by a landslide.
“Last year, we only had three guys who had decent varsity minutes, but this year we’ll have seven or eight.”
The Dragons will get their first action of season this Thursday against Piketon at The Carl York Center.