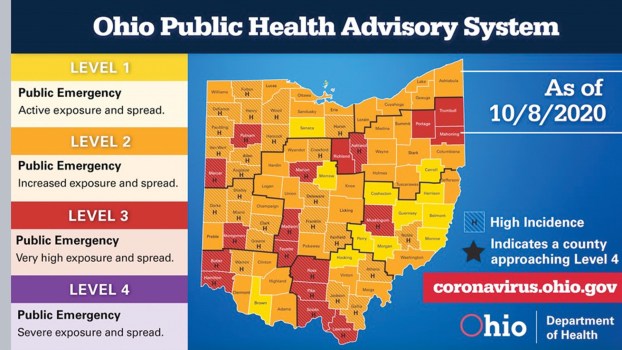 Lawrence County back to Level Three in COVID-19 alert

Number of counties at Red designation highest since July

Lawrence County has been elevated again to Red Level Three threat in the latest COVID-19 alert map from the Ohio Department of Health.

It is the second time the county reached the designation since the four-tier alert system was implemented this summer.

Neighboring Scioto County remained at Red Level Three for the third week, also a second stint at the designation.

Currently, 18 of the states 88 counties are at Red Level Three.

Lawrence and Scioto counties were also marked with an “H” rating for high incidence on the newest map, which 14 of the Red Level Three Counties shared.

Neighboring Jackson and Gallia Counties remained at Orange Level Two on the latest map. Both also had an “H” rating.

DeWine said the number of red counties was the highest on the map since the week of July 23. The 58 orange counties were the highest recorded since the system’s inception.

No counties were listed at the highest designation, Purple Level Four.

The governor spoke of the causes of the spread.

“In half of our new red counties, there are outbreaks related to funerals or weddings,” he said. “In one example, there was a wedding where two grandfathers died due to COVID. Examples like these are absolutely heartbreaking.”

DeWine said the numbers are “not good” regarding positivity trends.

“Ohio’s lowest positivity was in mid to late September, when our single day rate dipped to 2.5 percent several times, and our weekly average was 2.7 percent for the week of Sept. 18,” he said. “Today, our daily positivity has increased. Right now, Ohio’s positivity rate has jumped to 3.9 percent and the seven-day rolling average is 3.3 percent. This reflects the ongoing increasing trend of virus spread that we are seeing throughout the state.”

The Lawrence County Health Department reacted to the latest Red Level Three designation for the county.

“We want to emphasize that all our school districts are doing an awesome job keeping students and staff safe,” a message from department director Georgia Dillon read. “We’re in constant contact with them, and we are thankful for the policies they’ve put in place. The majority of cases we’ve seen during the past month have come from after-school activities not related to school functions, funerals, parties, bon fires, churches, and other get-togethers, and have involved all age groups.”

The department said Red Level Three means there is very high exposure and spread. “Guidance for Red Level Three includes limiting activities as much as possible, decreasing in-person interactions with others, considering necessary travel only, and limiting attending gatherings of any number. Other things that will stop the spread include wearing a face covering when in public, social distancing (at least 6 feet between you and others), washing your hands frequently and/or using hand sanitizer if soap

and water aren’t readily available, not touching your face, covering coughs and sneezes with a tissue, or into the bend of your elbow.”

Dillon said the way to remove the Red Level Three designation is to decrease the high incidence threshold of cases over the next two weeks. She asked those scheduling community events to contact the department.

The state also released county-by-county numbers regarding the highest rate of occurrence.

Pumpkins on Vernon event is Saturday

A bit of fall will be coming to a street in Ironton this weekend. A vendor festival called Pumpkins on... read more