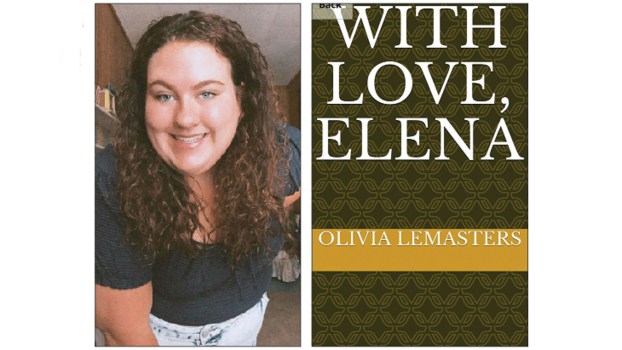 What began as a school assignment last year has turned into the launch of a writing career for an aspiring young Ironton novelist.

Olivia Lemasters, the daughter of Tori Bencill, is a junior at Dawson-Bryant High School. Last week, she published her first novel,

“With Love, Elena,” on Amazon.com and it is now downloadable for Kindle reading.
Lemasters said the work began as a project in her English class in her sophomore year.

“I started writing and I saw how important this was to me,” she said.

She said the theme began when she had originally conceived of it as a piece about her own future, before becoming a fiction narrative.

“I conceived of the character of the book based on what I wanted my life to be like — traveling, meeting cool people and going on adventures,” she said. “But, then I realized, that didn’t mean anything to anyone but me.”

She said the novel opens with its title character, Elena, a wealthy girl unhappy with her life, contemplating suicide, and, as it unfolds, she is motivated to instead pursue her dreams.

Lemasters said she wanted the novel to be published during Suicide Prevention Week, giving “passion to my purpose.”

She said, when she first talked to her mother and teacher about the subject matter, they were uncomfortable with it.

“But, after they read a couple of pages, their tone changed,” she said. “And they said it was definitely something that needs talked about.”

She said the work, available as an eBook, is 50 pages and is age appropriate for middle school and up.

She said, despite the weight of the subject matter, it is an uplifting read.

“I hope it’s something people will read,” she said.

Lemasters said she plans to continue writing. She said she is currently in the process of writing a second novel.

In addition, she said she plans to revisit Elena’s story as part of trilogy, with each installment examining the events of the story from another character’s viewpoint.

While she sees more writing in her future, she said she does not envision it as her primary career and that it would be more of a hobby.

She said her ultimate plan is to go to law school and to be a civil rights attorney,

She said she’s had a few dozen people read her work so far and the feedback has been very positive.