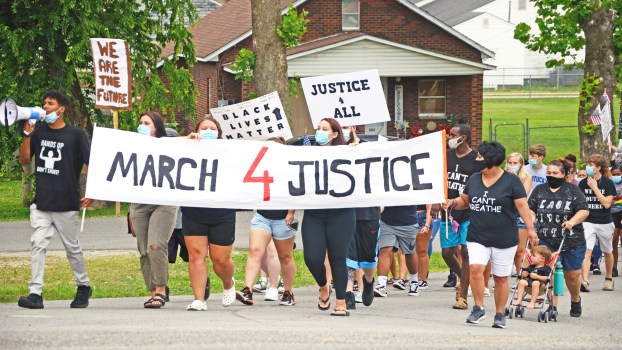 Around 150 people participated in a march for social justice in South Point on Friday evening. (The Ironton Tribune | Heath Harrison)

Around 150 people participated in a march for social justice and listened to speakers at South Point Park on Friday evening.

The crowd marched up Second Street and looped back around to the park, taking Third and Fourth streets. The march was held to commemorate George Floyd, who died while being detained by police in Minnesota at the end of May.

The Minneapolis man was taken into custody by the police on suspicion of trying to use a counterfeit $20 bill to buy a pack of cigarettes. He was handcuffed and put on the ground. A white Minneapolis police officer put his knee on the Floyd’s neck for eight minutes and 46 seconds. A video of the incident sparked global protests.

Marchers in South Point chanted “No justice, no peace,” and “Whose streets? Our streets,” as they marched, as well as singing songs like “This Little Light of Mine,” and parts of “Lean On Me.”

Before the event began, everyone who entered the park had their temperature taken, and the organizers offered masks and hand sanitizer for all of their guests. Social distancing was encouraged, with tape marking six-foot distances all around the park.

The event opened with a prayer from James Reed, a pastor at 16th Street Baptist Church.
Johnson then discussed the importance of fighting racism in the current world.

“There are no two sides of it anymore,” Johnson said in his speech. “By ‘it,’ I mean racism. Racism is a public health issue. We must do more to attack bigotry in this county and nationwide. Being anti-racist is not enough. You must be vocally anti-racist. You must call hate out when you see it. You must stand up for minorities that are under attack, and you must unlearn these old hateful ways of America.”

Johnson said he was deeply outraged when he saw the viral video of George Floyd’s death.

“People are tired of losing their mothers, fathers, brothers and sisters,” Johnson said.

He encouraged the crowd to continue to have open discussions about race. He also encouraged them to vote, citing that 43 percent of eligible Americans did not vote in the last election.

The goal for the day, Johnson said, was to encourage equality and justice for all people.

“We are here to say that we know racism exists and we will not tolerate it in this county,” Johnson said. “You may ask ‘What do you want to see happen out of all this?’ My answer to that would be justice for all. Not some, not just a few, but for everybody.”

Speaker Daniel Murphy, a teacher and football coach in Ironton, gave a speech he said he would title “I am tired,” if it had a title. He talked about how he was tired of waking up and living in a world full of racism.

Murphy said that the death of Elijah McClain, a 23-year-old who was killed in police custody in Colorado after picking up an iced tea for his brother, hit him especially hard, not only because he was a young Black man who deserved to live, but because it reminded him of his nephew.

“I literally sat in my car and cried for an hour and a half last night, and I regret that I watched that film,” Murphy said. “He is different. He is an introvert. My nephew is the same way that … He loves to shoot dancing videos. He loves to be in the arts. He’s all about that stuff. So I felt that strike from that pain that that young man’s family’s gonna have to go through. We have to change.”

Murphy hopes to see changes in legislation that actively fight against racism, like a law implementing repercussions for calling the police on someone who isn’t doing anything wrong, but is just existing as a Black person.

Although many of those who attended the event did so to honor George Floyd, they also had other reasons that protesting for justice was important to them.

“It’s about time that this world gets a change,” Eleanor Bacon, of South Point, said. “Fear no evil from no one. Lives should be treated as equal, for sure. … It’s been going on for too long, and it needs to be changed. There’s kids growing up, they need to know what the world is all about, and that it’s about lives, not different lives. No matter what color, what race, it’s lives that matter.”

Others, like Alexia Sharp, who assisted with the march and took the temperatures of those in attendance, said she was there to help and to show appreciation for her culture. She was very greatly surprised by the crowd the march had gathered.

Other speakers included Brad Adkins, pastor and South Point city councilman, who said that although police officers need prayers for them, racism and discrimination is not a partisan issue.

“We cannot say that all lives matter when our black friends are under attack,” Adkins said.

The crowd also heard from Susan Altizer, the daughter of immigrants and a Spanish teacher in South Point, who discussed racism in other minority communities. She said her mother, who used to tell her not to go out in the sun when she was younger so that her skin would not darken.

“You have to call out racism, even when it’s in your family,” Altizer said.

Brea Martin, from Russell, Kentucky, gave Sojourner Truth’s “Ain’t I a Woman,” speech, given originally at the 1851 Women’s Rights Convention held in Akron, Ohio. It is considered to be one of the most famous abolitionist and women’s rights speeches in United States history.

Another speaker at the event, Josh Parker, the South Point School Board president, discussed how important the Southern tip of Ohio was for Black enslaved people escaping from their enslavement at one time in history. He also encouraged the community to spread positivity.

South Point Mayor Jeff Gaskin rode along behind the march in a golf cart, picking up those who were unable to finish the full distance.

“It was a good peaceful gathering, it was on target, and we need to keep working,” Gaskin said

Before the march, Johnson led a chant honoring some of those who have died in incidents with police, saying “say their name,” and having the crowd respond with the names of George Floyd, Breonna Taylor, an EMT who was shot by police while sleeping in her home, and Tamir Rice, a 12 year old boy shot by police because he was holding a toy gun.

Johnson said he was very happy with how the march went.

“We had a very great turnout, especially for a small little village that is close-minded,” Johnson said. “We had a good turnout to rally for change and march for justice, and it was just a really good, peaceful event that ended with music and speeches.”

“We’re going to send shockwaves through this town, like I said that it’s time to change and a change is going to come.” Johnson said.

To the white people who are looking to help, Johnson recommends using their voices to speak up and fight for equality, while dismantling racist, oppressing systems.

“Just come together and fight for what is right,” Johnson said. “Fight for equality, fight for equal rights … We’re past that time. It’s 2020, and it’s time to reinvent the wheel, it’s time to scrap everything that had something to do with racism and that was built off racism.”