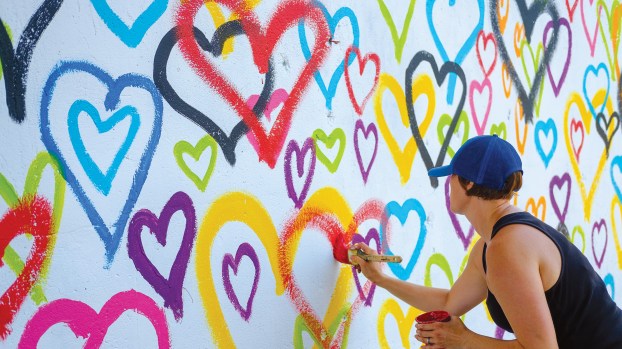 Volunteers from the Star Community Justice Center paint one of the overpass foundations. (The Ironton Tribune | Jeremy Holtzapfel)

A message of hope

You may have noticed that Ironton is getting new batches of art on public spaces.

The latest project was on Saturday, when members of the community painted one of the less visible spaces in Ironton, the support structures underneath the overpass on Second Street on the north end.

The project was done under the name #erasethehate with a specific goal of replacing swastikas and other graffiti with much more positive symbols and words like thousands of hearts and the phrase “hope love heal.”

That project was done by the nonprofit organization Third and Center, the City of Ironton, STAR Community Justice Center and Sherwin Williams.
Abby Kuehne, with Third and Center, said that particular spot was chosen after conversations with Ironton Mayor Sam Cramblit.

“The mayor had mentioned to us, on multiple occasions, that he wanted some type of art project there because of the graffiti and the racism that was there, the Nazi symbols and a lot of ugly, ugly things,” she said. Amanda Cleary, also with Third and Center, started arranging things. “And once we decided to do it, it was all arranged in less than two weeks.”

Third and Center received a grant from the Ohio Arts Council and has done other projects including painting the crosswalks at the intersection of Third and Center streets and installing four bike racks, made by students from Collins Career Technical Center, near the Ironton Rotary Fountain.
Kuehne said that they had worked with people from STAR Community Justice Center on the crosswalk project and it was “so easy that we wanted to work with them again. They were happy to do something beautiful and positive in the community and wanted to do something like that again.”

There were 10 clients and two workers from STAR, Kuehne and Cleary and their husbands, Ironton Councilman Jacob Hock, The Ironton Tribune publisher Sarah Simmons and The Ironton Tribune photographer/marketing specialist Jeremy Holtzapfel. Kuehne also brought in a couple of friends visiting from Florida.

“Everyone was just so excited to contribute,” Kuehne said.

They started around 9 a.m. and finished up around 5 p.m.

“It was amazing,” Kuehne said of her reaction when the work was all finished. “It speaks for itself in how bright and bold it is. And it has such a positive message, specifically for our community. We’ve been in an economic recession for so long and then on top of that, we have the opioid epidemic. Those words, ‘hope love heal,’ are truly what we need to heal ourselves.”