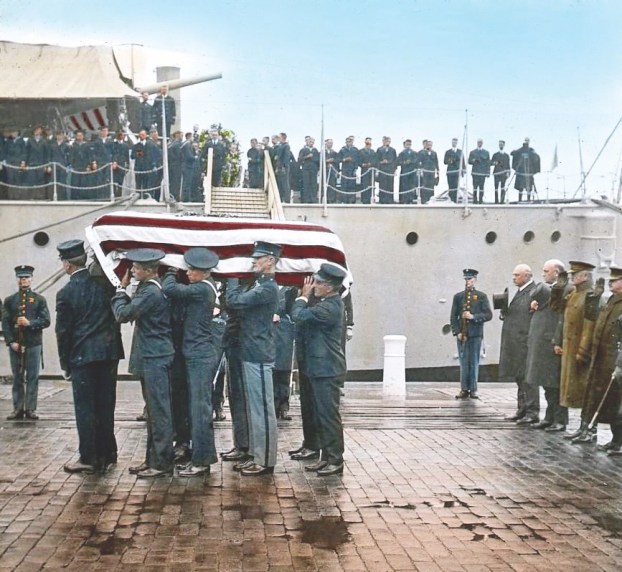 The Unknown Soldier from World War I is taken from the USS Olympia at the Washington Navy Yard and transported to the United States Capitol to lay in state in this 1921 photo. On Nov. 11, 1921, the body was interred at Arlington National Cemetery in Arlington County, Virginia. (Public domain)

‘An American Soldier known but to God’: Casualty of World I was first honored at Arlington tomb

The Balkan States were known as the “powder key of Europe” and had seen wars in 1912-1913. All it would take here was a spark to “set the world afire.”

From where would the spark come?

On June 28, 1900, Archduke Franz Ferdinand of Austria married Countess Sophie Chotek. This wedding date set the fuse to the first World War. The Archduke and his wife came to Sarajevo, the capital of the Austrian province of Bosnia, on June 28, 1914.

Six young men, members of “The Black Hand,” came to Sarajevo armed with bombs and pistols. They considered themselves Serbian patriots and hated the Archduke.

The six spaced themselves along the route the Archduke’s open automobile would travel. One of the six threw a bomb at the Archduke, but missed. Then five of the six lost their nerve. Gavrilo Princip, 19, did not fail in his mission.

The Archduke’s driver made a wrong turn. The automobile came within five feet of Princip. He fired his pistol twice. The Archduke was shot in the neck and his wife in the abdomen.

Leopold Lojka’s wrong turn allowed an assassination that caused Austria-Hungary to make impossible demands on Serbia and was that spark that ignited the powder keg in what we know as the “Great War” or World War I. Franz and Sophie were the first of its deaths.

The Allied roster numbered 24 nations involved at various times. Their enemies were the Central Powers – Bulgaria, Germany, the Ottoman Empire and, of course, Austria-Hungary.

Woodrow Wilson, our president, issued a proclamation of neutrality and asked Americans to be impartial in our thoughts and deeds.

However, at 8:30 p.m. on April 2, 1917, Wilson asked Congress to declare war. German U-boats took over 200 American lives on the high seas. Also, the “Arthur Zimmerman Note,” asking Mexico to join Germany if the United States entered the war, promised Mexico lands in the American southwest after the United States was defeated.

The unknown soldier was the hero of World War I and he has all but vanished.

After the war ended, Allied officials learned that the bodies of many of their soldiers could not be identified. Belgium, France, England, Italy and the United States felt these unknowns should receive special honors.

Each of these Allied governments chose an unknown and buried his remains near their national capitals. The “Unknown Soldier of the United States” was one of four dead taken from American cemeteries in France.

Four caskets had been placed in a chapel. Everyone was asked to leave and then Sgt. Younger came into the chapel. He walked around the four caskets four times and then stopped and placed roses on the casket facing the entrance to the chapel.

The casket was then prepared for its long trip to the United States on the famous USS Olympia, which had won the battle of Manila Bay in the Spanish-American War. The USS Olympia docked at Cherbourg, where the body of the “Unknown” was brought aboard.

The coal-burning ship headed toward the Azores to take on more coal. On the evening of Nov. 8, the Olympia dropped anchor in Chesapeake Bay. The Olympia moved slowly up the Potomac River in a drizzling rain. Fort after fort fired their artillery as the flag-draped casket passed by. At the Washington Navy Yard, a regiment of cavalry was waiting with a black-draped caisson and six black horses to carry the casket to the dome of the Capital Building.

At 4 p.m., a military band played “Nearer My God to Thee,” followed by “Onward Christian Soldiers.” The casket was placed on the catafalque in the Capitol’s Rotunda and during the night the rain ceased.

At 8 a.m. the next day, the doors of the Capitol were opened. Washington police estimated 90,000 to 96,000 people came in, four abreast, to honor the unknown American. For 16 hours, Americans paid their respects. Before, when the casket was placed in the Rotunda, President and Mrs. Warren G. Harding placed a white ribbon and roses on the casket. Vice President Coolidge and Chief Justice William H. Taft also placed flowers.

At 8:30 a.m. on Nov. 11, 1921, preparations were made to take the casket to Arlington National Cemetery. President Harding gave the keynote address.

A member of the Crow native American tribe, Chief Plenty Coos, representing all American Indians, asked “…that the dead should not have died in vain….”

The chief placed his war bonnet and coup stick upon the casket. Some soil from France had been poured over the floor of the narrow crypt. Moments after the body was lowered, “Taps” were sounded for the “Unknown One” and all who lay peacefully at Arlington.

Witnessing the movement of the casket to the Rotunda and to Arlington were many wives and mothers who lost husbands and sons in France. Their bodies had never been recovered and these women hoped that body of the “Unknown” might be that of their own. The tomb was completed in 1931.

A DNA analysis possibly would place a name on the remains.

What of Gavrilo Princip? He and his fellow members of “the Black Hand” were arrested. Due to his age, he was sentenced to 20 years in prison. He died on April 28, 1918, from inhumane treatment and tuberculosis.

By Bob Leith for the Tribune

Peter Funt: Sometimes, a rose is more than a rose

The rose bush outside our kitchen window is telling a different story this spring. Severely cut back each winter, it... read more