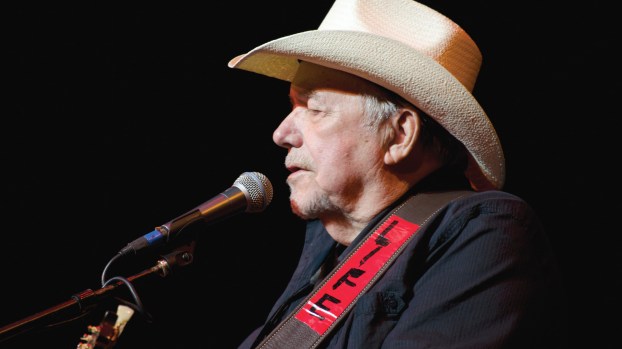 Pedro native and Country Music Hall of Fame member Bobby Bare performs at the Vern Riffe Center for the Arts at Shawnee State University in Portsmouth in this April 2018 photo. (The Ironton Tribune | Heath Harrison)

NASHVILLE — “Yeah, it’s all shut down here, too,” Bobby Bare said by phone, when asked how he was doing by The Ironton Tribune on Tuesday.

Bare, who celebrated his 85th birthday earlier this month, said he has been isolating during the shutdown around the coronavirus pandemic.

“I’m hunkered down here, and so are all my kids, and so is everyone else,” he said.

Bare said it has been a tough time, as he lost his friend, acclaimed singer and songwriter John Prine, this month.

“My heart’s hurting really bad,” Bare said of Prine’s passing at age 73 of complications from COVID-19. “That was a toughie.”

Bare’s social media accounts recently posted a full episode of the television show “Bobby Bare and friends” from the 1980s featuring Prine, who he described as “probably my favorite singer.”

“No matter what he did I loved it. I’ve never heard anything by John Prine that I did not like,” Bare, who recorded Prine’s “The Oldest Baby in the World,” wrote in a post.

Bare said Prine’s death was hard to take, as “I was just getting over Kenny Rogers.”

“Kenny and I went into the hall of fame together,” Bare said of their 2013 induction. “And, also, a year or so ago, we did a country music cruise together. Me and Kenny.”

Bare said he has been passing the stay-at-home time by talking regularly with two of his fellow country music legends — Willie Nelson and Kris Kristofferson.

“Kris and his wife called me from Maui three days ago,” he said. “They were hunkered down and I think they’re pretty safe there. And Willie is in Austin.’”

“They’re about all that’s left — Willie, Kris and Loretta (Lynn),” he said.

Nelson has been performing on video during the lockdown with his family, including doing this year’s Luck Reunion Festival online.

“His sons are really good,” Bare said of the family. “Lukas, he was in Neil Young’s band for a year or so. They’re a great a bunch of musicians, his kids, every one of them. The girls are great singers. The Willie Nelson family are very talented, gifted musicians — good singers and good people. I love all of them, and they love me, too, like a family.” 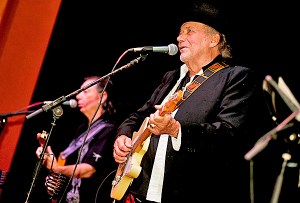 Bare closed by sharing a memory of growing up in Pedro, in the 1940s, where he said, as a six year old, he used to walk to the mailbox to grab the copy of The Ironton Tribune, so he could catch up on some western heroes of his.

“I used to read the funnies and couldn’t wait to see them,” he said. “I remember I used to walk three miles to the mailbox to pick it up so I could see what happened to Red Ryder and Little Beaver.”

He had a message for friends back home.

“I still talk about Ironton a lot,” he said. “Everybody knows where I’m from. Tell them all the Bares in Nashville are hunkered down and safe.”

OLBH site to remain open in case of need

Has an agreement with KDMC to have access to facility, equipment RUSSELL, Ky. — Despite the closing of Our Lady... read more