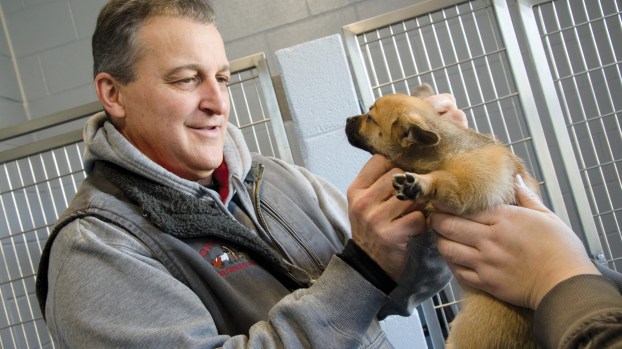 Veterinarian Mike Dyer says his line of work is about more than just taking an animal that is broke and fixing it.

Caring for the community

Veterinarian Mike Dyer says his line of work is about more than just taking an animal that is broke and fixing it.

“I see it in their face,” he says of those who come to him with pets. “We get to give in such a way and see joy restored in a family. And, even if there is not a good outcome, with euthanasia, people are glad that you are there for them, to be there and give advice and assist with the transition.”

Dyer has owned and operated Proctorville Animal Clinic since 1994.

He grew up in the Huntington area and said he was drawn to the work after assisting at a small animal hospital doing things such as cleaning cages.

“I got to see what it was like to be a veterinarian,” he said.

He went on to get his undergraduate in biology and zoology at Marshall and his DVM from the Ohio State University College of Veterinary Medicine.

In addition to his clinic, he works at the Equine Medical Center in Chesapeake, a spinoff operation, and does a shift at Tri-State Animal ER in Ceredo, West Virginia.

His practice, Proctorville Animal Clinic, has been chosen by the Stanton Summer Externship at the OSU to place fourth-year veterinary students for summer work experience.

Dyer said his clinic, which has been named as Business of the Year by the Lawrence County Chamber of Commerce, is in a rural setting and was ideal for the program.

He serves as president of the board of the Tri-State STEM+M Early College High School in South Point, Lawrence County’s newest public high school, which specializes in science, technology, engineering, math and medical education.

“Any local school has its own board,” he said of the school, which operates independently of other school districts, “for day-to-day work and making decisions.”

He said the school, which opened in 2017, is seeing momentum and is firmly established for a bright future.

Dyer is also legislative chair for the Ohio Veterinary Medical Association, which he says works with legislators on laws affecting animals and vets.

One issue he says is a focus of the group is the opioid epidemic. He points out that animal hospitals have to work with controlled substances.

“There are drugs used in these hospitals,” he said, noting that human regulations aren’t necessarily applicable to the industry. “We make sure there isn’t overreach.”

Dyer lives in Getaway, where he and his wife, Vallery, operate a farm and raise beef cattle. The farm was visited by Lt. Gov. Jon Husted in 2018 during the election campaign.

Dyer’s commitment to the community came up recently in South Point, where the village has been dealing with an issue of a feral cat population.

Dyer, working with the Cabell-Wayne Animal Shelter, takes part in a trap-neuter-release program, where a team goes out and catches the cats.

“The premise is to trap and neuter them, notch their ear and take them back,” he said, noting that cat colonies can breed out of control. “This way, they won’t compete for food, they don’t breed and the colonies don’t allow newcomers.”

Once named as Business Entrepreneur of the Year by the Lawrence County Chamber of Commerce, Dyer has built a network of veterinary practices over eight hospitals, which have 75 employees and four doctors.

Terry Rush, a friend and client of Dyer, tells of his experience with Dyer.

“The very first time my wife and I met him, he was so easygoing,” he said. “Not only did he care for the animal, he explained everything to us.”

“It’s successful to connect with the owners,” he said. “It’s a three-way relationship.”

Dyer also works with One by One Animal Advocates, a rescue group out of Huntington, and he is a regular visitor to the Lawrence County Animal Shelter in Ironton, where he assists with population control through spaying and neutering, examines animals and provides documentation for out-of-state rescue groups helping to get the dogs and cats to forever homes.

Melissa Nicely, the poundkeeper at the shelter, had high praise for him.

“He’s very efficient,” she said. “He takes the time and anything we need, he’s there for us. We never know what’s coming in, so we always call with stuff. Any time there’s a need, he goes the extra mile. And, since he’s been down here working with us, things have changed a lot.”

From mine to table