Day doesn’t want to think about no football season 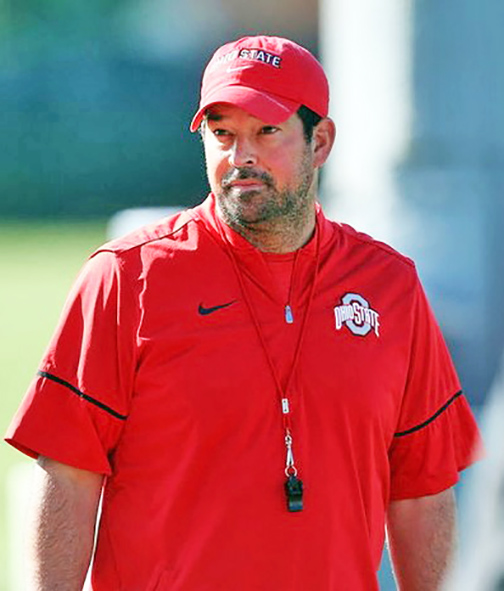 COLUMBUS — Ryan Day doesn’t want to go there. Ohio State’s second-year football coach doesn’t want to get stressed out over the possibility the college football season could be postponed or canceled because of precautions to prevent the spread of the coronavirus.
“I don’t know, I really don’t. There are so many scenarios out there. You can go down so many rabbit holes. Until we know for sure, we’re kind of wasting energy,” he said on a teleconference call on Wednesday.
“Certainly, it is a concern. That would be awful but I’m trying not to get that far down the road. I’m just trying to do a great job today.
“I know that sounds cliched, but until we start to know more, it’s hard to get that far ahead of ourselves.
“There are so many things that could happen and you could stress yourself out and worry about it and maybe it doesn’t happen. You hope and pray this thing starts to flatten out soon.”
Ohio State had completed the first three practices of spring practice when it was shut down because of the coronavirus. Players also are not allowed access to OSU facilities for an indefinite period of time.
Some of Ohio State’s players have returned to their homes. Others are in their apartments in Columbus and a few were given permission to stay in dorms because of injuries or because their home areas have a high incidence of coronavirus cases. All classes are online.
“We’re trying to stay in constant communication,” Day said. “Their lives are so structured when they’re here that we have to make sure we do the best we can remotely to give them that structure. This week the first concern was academics and making sure everybody was comfortable with their classes.
“The football part of it and all that in terms of working out is very individual based. We have guys who are in downtown New York City. We have guys who are in California and Hawaii, Seattle and all over the country.
“We worked really hard to get ourselves in shape and ready for spring practice, so we want to maintain that the best we can, given the circumstances,” he said.
Some other thoughts from Day:
— EXTRA WORKOUTS: He hopes there can be additional workouts to make up for the missed spring practices once the players get back on campus.
“We’re hopeful that down the road there are some workouts we can capture back, based on when everybody comes back on campus. But until then we’re not really sure,” he said.
He also pointed out that because some Big Ten teams started spring practice earlier than OSU, those teams had already had as many as nine practices when the rest of their spring schedule was canceled.
• SILENT TREATMENT: When he was asked about running back Trey Sermon, a graduate transfer from Oklahoma, Day said he could not talk about him because Sermon is not able to sign financial aid papers with Ohio State during the current shutdown.
That means he is technically still a recruit and NCAA rules do not allow coaches to talk about recruits.
• TEAGUE A FAST HEALER?: Day sounded somewhat optimistic about running back Master Teague’s ability to come back from an injury, widely speculated to be an Achilles tendon problem, suffered on the first day of spring practice.
“I can’t go into too many details in terms of the medical stuff. Master is a very mature young man and he is going to attack this rehab and do the best he can to get back as fast as possible.
“He’s a little bit of a genetic freak so we’re hopeful that with our team and his hard work and the way his genetics are we get a speedy recovery. But we also don’t want to rush it. So there’s a fine line there,” he said.
• VETERAN LEADERSHIP: Day said accountability is needed more than ever with the players scattered across the country.
“I think accountability is at an all-time high in terms of making sure these guys are doing what they need to do. The older guys know what they’re supposed to do. The younger guys need a little bit more guidance. Like everyone says, character is really shown when nobody is looking. And this is the ultimate test of that,” he said.
• NO CORONAVIRUS: Day said no one in the football program has tested positive for the coronavirus.
“There is nobody in our (football) family that we know of who has tested positive for it,” he said.
• WORKING FROM HOME: Day said working from home means his day starts by watching film, maybe of his own players, maybe of upcoming opponents. Then he makes calls to see how recruiting is going and might watch films of recruits. He talks with his staff, talks with players on OSU’s leadership council, talks with strength and conditioning coach Mickey Marotti two or three times a day and talks with athletic director Gene Smith and other administrators.
“It’s a lot of phone calls, a lot of face timing and a lot of watching films,” he said.
• AT HOME WITH THE DAYS: Day said his family has tried to create a routine while at home, including a mid-day workout or run. He also says he has attempted a couple of different chili crock pot recipes and binge watched Tiger King with his wife.

Keenum’s NFL journey reunites him with his best coach

CLEVELAND (AP) — Case Keenum’s NFL journey is reuniting him with a coach who brought out the best in the... read more