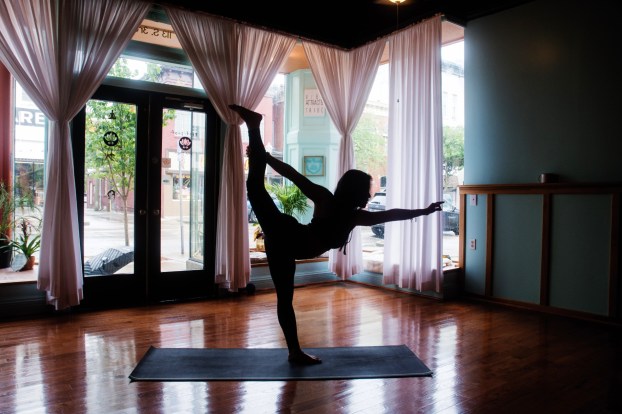 Viviane Khounlavong, of Studio Dara in Ironton, has been offering yoga and other sessions online since December. Since the state of emergency was declared regarding the coronavirus, she has increased her online offerings to keep instruction going. (The Ironton Tribune | Jessica St. James)

With Ohio under a state of emergency due to the worldwide outbreak of the coronavirus, limits on crowds and gatherings and the practicing of social distancing have temporarily closed the doors of many businesses in Lawrence County to the public.

As a result, locals are working on ways to adapt and keep things going through alternate means.

At Studio Dara, a yoga, wellness and fitness business in Ironton, owner Viviane Khounlavong announced a closure on March 16 due to state mandates.

She said, to adapt, she has expanded on something she has offered the past few months.

“I’ve been doing online studio classes since December,” she said, stating they were created for those who live out of the area and for those who could not make it to the studio.

With the closure, Khounlavong allowed those who took her in-person classes to sign up for an online group, in which they can take part in Meditative Mornings, Sculpt and Power Yoga classes via livestream video.

She said she is also taking new sign-ups for the group for $20 through the end of April. Those interested can contact her through Facebook and Instagram, where payments are accepted via PayPal and Venmo.

“Lots of people have joined in and we’re just trying to stay positive,” Khounlavong said, stating stress levels are high and yoga is a proven way to manage them.

She said, despite the ongoing crisis, there are ways to connect and deal with it.

“We all still have our blessings,” she said.

Cyndi’s Dance Studio closed a week earlier than many locations, a week before mandates went fully into effect.

Owner Cyndi Roth said they have been working to keep instruction going for their students, creating Facebook groups with teachers continuing their job via video.

“We have about 18 groups,” Roth said. “And they all have their own material to work with.”

She said a great deal of their students take part in competitions and, this way, they can continue to practice routines in the next few weeks.

“Our state competition is at the end of April,” she said. “And we’re praying for now.”

She said it’s important for children that there is some outlet in the meantime.

“They’re losing their normal life,” she said. “And there has to be some normalcy.”

She said social media and Facebook have been a great help in keeping her students at the dance school connected.

Roth has been hit three ways by the shutdowns, with her two other business, a tanning bed and a tuxedo rental company having to close.

And her church, Mamre Baptist Church, has been holding services online, with the pastor addressing the congregation via video.

“That’s important for people,” she said.

With bars and restaurants forced to close, local musicians have lost venues to perform in.

One of those is Kevin Brammer, an Ironton native who recently moved back to the area.

His band, Kevin Michael and the Sons of Revelry, have been together for about a year and recording an album of country/jam band music.

“We had been playing shows for about a year and then this happens,” he said of the stop in the local music scene. “It sucks. As much talent as there is in this region, it’s at a standstill.”

He said, to cope, many artists are playing house shows or setting up livestream performances to get their music out there.

“But nobody knows what’s happening or long it will last,” he said. “It’s very frustrating. I’ve been playing live since I was young.”

Brammer has been planning to open a recording studio in town, Iron Town Recording Company, with friend Bruce Fugett, which he said would be a state-of-the-art-facility. He said they are hoping to offer something to the area, giving artists of all genres a place to record.

“You don’t have to go Nashville or move away from home,” he said. “You can make it happen here.”

He said his band had been hoping to play a show at the Ironton Elks, along with a number of other artists, though those plans were put on hold with the shutdowns.

He said for musicians, it is frustrating, because, for them, music is “not about money, but passion.”

“We’re social creatures,” he said. “We want to bring people together. That’s what a musician does.”

Brammer said, despite the tough times, he has been impressed with what he has seen in Ironton.

“Even during this crisis, the town is handling it so well,” he said. “People are helping and it does not feel like chaos.”