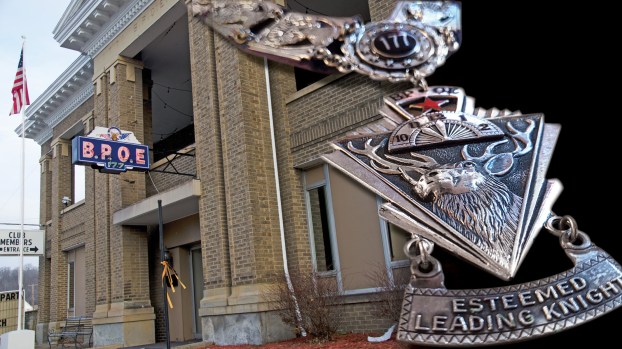 PROFILE 2020 – Helping Hands: Lodge began in 1891, has long been a supporter of charities

The Elks Club is one of Ironton’s oldest organizations, celebrating its 119 years as an organization.

The club, properly known as the Benevolent and Protective Order of Elks, was founded in Ironton in 1891.

The first Elks Lodge has its roots in New York. It was established in 1867 by a group of actors and entertainers known as “The Jolly Corks,” as a private club in an effort to get around New York City’s laws about taverns being closed on Sundays.

The Jolly Corks switched their group’s name a year later, and its mission, after the death of one of its members left his wife and family without an income. The lodge began to focus on charitable efforts, like helping veterans, scholarships and other local charities.

The newly-named Benevolent and Protective Order of Elks was founded “To promote and practice the four cardinal virtues of Charity, Justice, Brotherly Love and Fidelity; to promote the welfare and enhance the happiness of its members; to quicken the spirit of American Patriotism and cultivate good fellowship.”

One of the oldest members still active in the lodge is Tom Allyn, owner of Allyn’s Jewelers, who has been with the Elks for over six decades.

“My dad (Ted Allyn) was a member, so I joined too,” Allyn said. “And it was right next to our house.”

Another big part of his reason for joining was to socialize.

“Every New Year’s Eve, they had a huge dance,” he recalled. “It was quite the event. Everyone was all dressed up. It was really something.”

He said it was a different era for the club then. It was an all-male organization at the time and casual attire was frowned on.

“Members were required to wear ties and a lot of them wore hats as well,” he said. He also remembers that there were less fancy items too.

“They had spittoons everywhere,” he said.

Allyn said he still goes to the Elks Lodge, usually on Wednesdays, to play pool or to catch one of the big games on the television.

The Elks was almost always exclusively a men-only club well into the 1990s. In 1907, the Elks passed a rule that the lodge would not have an auxiliary like some other clubs have, so that meant there were no nationally-recognized women’s auxiliaries, except at some local lodges. In 1995, at the Elks National Convention, a measure passed to remove the word “male” from national membership requirement.

“We’ve had women as officers and a lot of women have joined the Elks,” Allyn said.

A book published by the Ironton Elks Lodge 177 for their 50th year, their “Golden Jubilee” describes their history.

The idea for the lodge was floated in “early fall, 1890” by Ironton businessmen and leading citizens that Ironton had a need for a fraternal organization like the Elks and started plans for a charter. They held a meeting on Oct. 8, 1890 at the Knights of Pythias hall “in the Morris block of Center Street” and created the lodge, which got its charter, dated May 19, 1891, which was issued after the lodge was organized. The initiation fee was $25. The members voted to rent the second floor of the Selb building on Second Street for their lodge at a cost of $200 a year.

In 1892, the lodge was moved to the Brumberg Building’s second floor.

By 1884, the lodge’s finances were in such a bad shape that the lodge held a show to raise funds. While the show was a success and helped pay bills, a vote was taken to give up their charter. The vote failed and the lodge got a $91 loan to pay bills.

The Golden Jubilee book continued through the years as the Lodge struggled to pay bills, despite the enthusiasm of its members. It wasn’t until 1899 that the lodge had money in its treasury to cover all its bills.

1900 marked a new location for the lodge on the third floor of the Syndicate Building on Second and Park avenues. Having some cash flow, the now much bigger lodge purchased a piano and some pool tables and had a new dance floor installed. The Elks held their first dance around Thanksgiving.

“From this time on, the struggles of the Ironton Elks were over, and the younger men took charge of social affairs,” it said in the book. In 1906, the Elks were excited that for the first time in lodge history, the treasurer’s report showed the balance over $1,000.

In 1909, members of the Elks started to visit lodges in Ashland and Catlettsburg to carry home a “shoe box,” after Ironton and the whole of Lawrence County voted to become dry and no longer sell alcohol.

In 1916, the lodge held fund raisers like a street carnival to raise money to purchase land on Park Avenue, across from the Lawrence County courthouse, to build a new home. The lodge used $850 from its treasury, $1,000 the lodge had on interest and a $5,000 bank loan to secure the mortgage on the land. An architect was hired to come up with designs for the new building.

Even as World War I broke out, the plans went ahead with the project.

The service flag at the lodge had 89 stars for Elks members who enlisted. Among them was Col. William C. Lambert, who joined the Canadian Royal Air Force in 1919. He was awarded a Distinguished Flying Cross by King George.

In 1917, the cornerstone of the new lodge was laid on July 20.  The building was completed at a cost of $85,000. The first meeting wasn’t held in the new home until November because of a flu epidemic. The mortgage was paid off in 1926.

Lodge finances took a hit again as an economic depression hit America. The lodge kept doing its charity work even as it lost members and funds. In 1935, it was $6,000 in debt. Within the next couple of years, the finances were stabilized.

Elks have a long tradition of charity work.

From the beginning, the Ironton Elks Lodge voted to give $25 to widows of members at Christmas time.

The Golden Jubilee book mentions the Elks sending $25 to help victims of the San Francisco earthquake in 1906. In 1913, the Elks donated $200 to members who had lost their homes in that year’s flood, which caused over $1 million in damages to Ironton. The lodge bought stock in the Ironton-Russell Bridge. Members donated every year to help fund a Christmas tree in downtown Ironton. In the 1920s, members gave out baskets of food as well as shoes, gloves and socks to children. In 1926, the Elks took the lead in building a stadium for the Ironton Tanks team to be built next to the high school which would seat over 3,000 people under one roof.

During the 1937 flood, the upper levels of the lodge were used as a relief station.

For the past three decades, they have had an annual Christmas party at Rock Hill Elementary School for the multi-category disability students. Members get a list of the student’s Christmas wishes and then hold a party where Santa Claus distributes gifts and then they all have pizza. The event is paid for by grants and donations.

The Elks have made donations to local organizations such as the Ironton Police Department and the Lawrence County Sheriff’s Office, the Little League so it could get the batting cage nets, to the Domestic Violence Shelter and to the Ironton City Mission, among others.

“We have always tried to help out where we could,” Allyn said. “The Elks is a great organization. And we are always looking for members.”

PROFILE 2020 – ‘Beautiful City of the Dead’: Woodland Cemetery serves as resting places and wealth of history

With more than 29,000 interments and more than a century of operation, Woodland Cemetery serves as a final resting place... read more