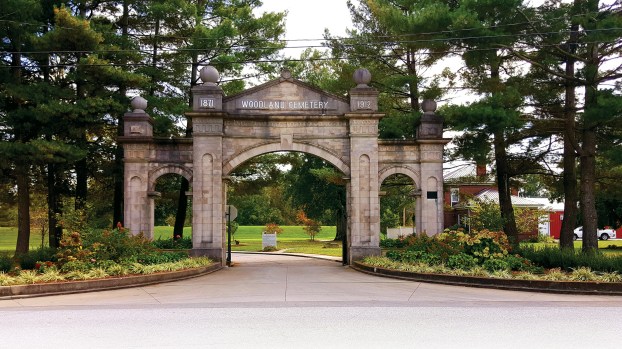 PROFILE 2020 – ‘Beautiful City of the Dead’: Woodland Cemetery serves as resting places and wealth of history

With more than 29,000 interments and more than a century of operation, Woodland Cemetery serves as a final resting place for many of the county’s residents, as well as several historic names.

The cemetery’s origins date back to 1870, when its land was purchased from Dr. Orrin E. Newton.

“This was a great big farm at the time,” Lauren Cooke, office assistant for the cemetery, said.

Christi Waybright, the office manger for Woodland, said it was a decision by the municipal government to create the cemetery.

“The Ironton City Council passed an ordinance authorizing 59 acres for the purpose of burial from Newton,” she said.

Plotted by Engineer Grove, the cemetery was dedicated in 1871.

On that dedication day, 15,000 people were present, along with the Union Cornet Brass Band. The crowd went by boat from Railroad Street in Ironton to the docks in Coal Grove, then marched to the cemetery’s back entrance.

It was on this day that the cemetery’s first lots, a half dozen, were sold.

The first two burials at the cemetery were Dorsette Nolte, who was exhumed from Kelly Cemetery and reburied at Woodland, and Sperrell Dennon, who was buried on May 1, 1871.

The cemetery’s first expansion took place in 1911. By that point, about 5,000 people had been buried there.

It now covers 100 acres, with its entrance and gate at now at Loraine Street in Ironton.

Waybright said the cemetery still has vacancies and averages 20 burials a month.

“We had 17 burials here in December,” she said.

It is governed by three members on a board of trustees.

“One is voted on by the Ironton City Council,” Waybright said. “One is an Upper Township trustee and one is at large, who someone from the community voted on.”

Waybright said there is a staff of seven at the cemetery, including a foreman, four on the grounds crew and two in the office.

In the office, located in a former home at the cemetery’s entrance, they have a thorough accounting of the records to its founding.

“The records of burials go back to the beginning,” Waybright said. “We have all the old burial nooks and maps.”

Near the office, as you approach the cemetery, you pass the site of the former vault.

“It’s where they stored bodies before they were buried,” Waybright said.

Upon entering the cemetery, one of the first sights is a canon, which marks the Grand Army of the Republic section, where those who served on the Union side of the American Civil War are buried. In addition, some veterans of the Spanish-American war are interred here as well.

Many of the bodies were reinterred here after the Carlyle Tile Plant was being built and a cemetery was moved.

Going deeper into the cemetery, you approach Section 7.

“That’s the most historic — it’s where Nannie Kelly Wright is buried,” Cooke said of the only known female ironmaster and one of the wealthiest women in the world during her life. “And John Campbell, the founder of Ironton, is buried there.”

It is in this section that the most elaborate statues and monuments can be found.

One large monument, the towering Means cross, has a tragic story behind it.

“One of the workers was killed when they were installing it,” Cooke said.

Toward the back is the mausoleum of William C. Lambert and his wife.

Lambert, a fighter pilot in World War I is believed to be the second ranking American ace of that conflict. A museum dedicated to his life and the military history of the county is being planned for Ironton.

The cemetery is home to the Lawrence County Museum’s annual historic cemetery walk each fall, as members of the community portray those notables buried within Woodland. The event usually draws hundreds of visitors.

Cooke said the cemetery has been the subject of many legends and ghost stories.

For instance, it is said that the spirit of Antoinette Sherpetosky Peters, a dancer with the Imperial Russian Ballet, can be seen outside her mausoleum at night.

“They say she comes out to dance,” Cooke said.

Peters, who married an Ironton native living in Chicago, was buried at Woodland after her death in an automobile accident.

Another is the grave of Osa Wilson, near the cemetery’s entrance.

Wilson, who is said to have died from a fall down a flight of stairs after being struck by her husband, has a statue of a woman on her grave.

The story goes that a discolored area on the statue’s face always reappears, in the manner she was struck.

Wilson was also said to have been pregnant at the time of her death and people say the belly of the statue never collects snow in winter.

Last year, it was discovered that the cemetery had another notable resident, perhaps its most famous.

Acclaimed illustrator and author Edward Gorey, whose macabre works are known worldwide, died in 2000 in Massachusetts.

Though he never lived in Ironton, it was revealed that his ashes were interred at Woodland and buried in the grave of his mother in the family’s ancestral plot.

Near the back of the cemetery is Soldiers Field, home to rows of veterans’ graves.

Each year, for the past few years, the local chapter of Wreaths Across America places wreaths on these graves.

In 2019, in memory of the chapter’s co-founder, Juanita Southers, who died earlier in the year, the group finally met its goal of getting a wreath for every known veteran in the cemetery.

It’s been called the “Beautiful City of the Dead” and the “Silent City Growing,” Waybright said.

PROFILE 2020 – A Continuing Legacy: Central Hardware’s owners are latest in a long line of locals

Figuring just how long Central Hardware has been a part of Ironton’s downtown history is a little complicated. But, no... read more