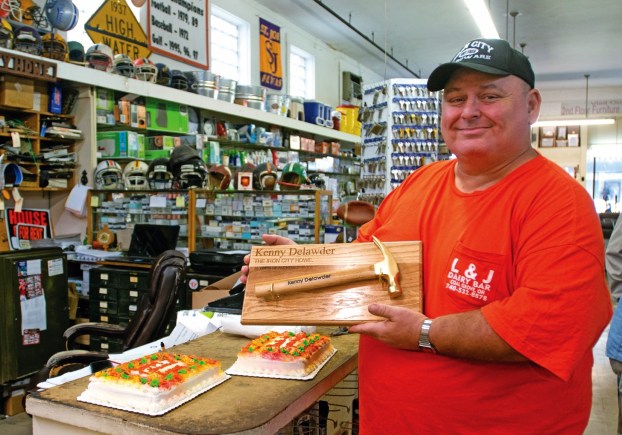 Kenny Delawder shows of a golden hammer given to him during a retirement party by Iron City Hardware owner Jim Hacker on Friday, Delawder worked at the store for 23 years. (The Tribune | Mark Shaffer)

Kenny Delawder who became a local celebrity for Iron City Hardware has left the business.

Delawder started at the hardware store 23 years ago for the late owner, Don Hacker, and then for his son and current owner, Jim Hacker.

While Delawder still liked working there, health issues forced the retirement. He lost a couple toes due to diabetes and can’t stand all day anymore.

“Don Hacker taught me this business, he treated me like I was one of his,” Delawder said.

“Kenny started loading and driving truck, but worked up to ordering and doing pretty much everything,” Jim Hacker said.

Delawder stayed for more than two decades because he like the work and the owners.

A door in Iron City Hardware is what Delawder jokingly refers to as a “wall of shame,” there are a bunch of advertisements that featured pictures of him and each one gave him a different nickname like “Y2K Kenny,” “Kenny Klaus” at Christmas time, “Quiz Bowl Kenny, “Karaoke Kenny,” and “Cowboy Kenny.”

So, how did the Hackers convince him to get a silly picture taken week after week?

“It wasn’t hard, I’m kind of goofy,” Delawder said. “I’ll do anything for a joke and it caught people’s attention. One guy, Tim Crank, always called me Kerosene Kenny any time he called and then he called me King Cod Kenny. So, I have all kinds of aliases. Jim came up with all of those.”

“He played along with us,” Jim Hacker said. “And everybody knows him for all the names.”

Delawder retired in September but on Friday, Jim Hacker had a little retirement party for him with a cake, balloons and a golden hammer for his 23 years of service to the store.

“I do miss coming to work,” Delawder said. “I enjoyed meeting people and the people I worked with, the socializing. I liked helping people out. They would come in and not know what they needed, we could help them find it.”

Delawder said he is trying to get better and is hanging around his house.

Jim Hacker, who has worked at the store for 50 years, said they are going to miss Delawder.

“He’s a good friend, a good worker. People love him,” he said. “He will be missed. I hate to see him go, but we will still be friends. I’ll still go to the Coal Grove game and watch his son play football. We just won’t have him around here as much.”

As part of his retirement party, Jim Hacker presented Delawder with a golden hammer, a trophy normally given to people who have worked in the hardware business for 50 years. Don and Jim Hacker both got the award.

“So, we stretched it with 23 years for Kenny,” Jim Hacker said, and then added with a laugh it was because they worked him twice as hard.

The Lawrence County Commission hosted its first meeting of November at Frisch’s Big Boy in Ironton last week and it... read more