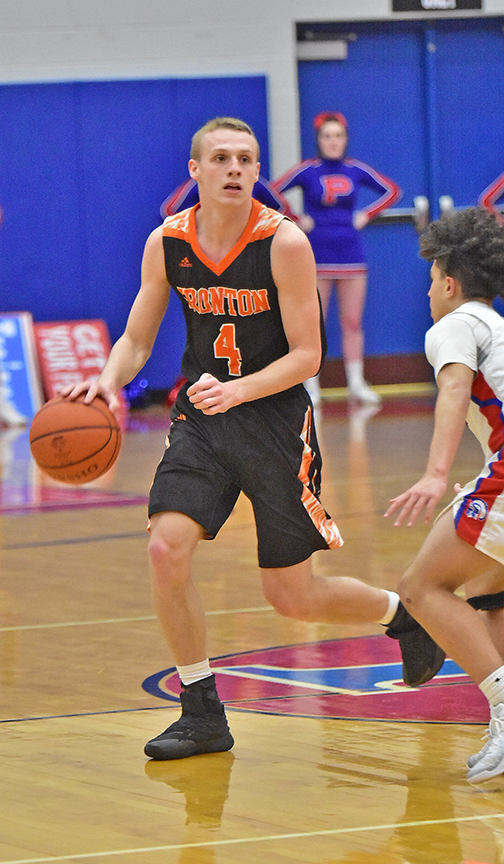 You’ve heard the old saying, “Shoot first and ask questions later.”
With Ethan Wilson, it’s more like, “Pass first, shoot later if that’s the only option.”
The Ironton Fighting Tigers’ 6-foot-23 senior point guard is known more for his assists than his scoring, and yet he reached a milestone against the Portsmouth Trojans on Friday, Jan. 18, when he scored the 1,000th point of his career.
“I knew I was close, but I’m more of a team guy so points and assists don’t matter as long as we win,” said Wilson.
Ironton head coach Mark LaFon said that the scoring milestone isn’t a true description of the type of player Wilson really is.
“That 1,000 points says something about his career, but I can never think of a time he took a selfish shot. I can never think of a time I had to get on him for talking back or rolling his eyes,” said LaFon.
“That 1,000 points is a testament of character and guts and he has it.”
Wilson has the speed and athleticism needed to be a true point guard, but there is more to his skill set. He has worked hard the past two years to develop the ability to go left or right with his dribble and he continues to work on his shot.
Just watching him bring the ball up the floor, fans can see his eyes moving back and forth looking for the open teammate or a possible unprotected alley to the basket.
“Mostly, I’ve been lucky to have the guys I’ve had around me the last couple of years have meant a lot like Charlie (Large), Kyle (Adkins) and Reid (Carrico). I get the garbage (points) off of them. I like to spread it out,” said Wilson.
While he speaks with maturity about the game, he hasn’t forgotten how it began when he was the starting point guard as a freshman.
“My freshman year, I wasn’t confident in my shot and I really didn’t look for my offense as much back then. But now I can see things where I can find my offense and find ways to attack and get other people open as well. I never thought I’d get to 1,000 points,” said Wilson.
“All that experience has helped. Most of the time when I’ve got a guy on me that’s a matchup that I like I need to be going to the hole at this point. I need to find my shots and usually I’ll tell coach that and I’ll try to get a set out of that.”
Wilson played football in middle school and then was a wide receiver for Ironton his junior year. He said the experience helped him in basketball.
“Football made me tougher for sure. Whenever I went to the hole and got contact it wasn’t anything. I got used to it,” said Wilson.
“I don’t think it made me faster, but for sure it helped me.”
While making All-Ohio is one individual goal, Wilson would also like to play at the college level. He has already had talks with Marietta and Notre Dame College in Cleveland. But for now, his eyes are really focused on team goals.
“I’m kind of waiting to make a decision (about college). First, we wanted to win the OVC championship. We want to progress as far as we can in the tournament. We want to get to Athens and to the (Schottenstein Center), honestly,” said Wilson, referring to the site of the state tournament..
There’s that Ethan Wilson old saying again. Win first, shoot later.