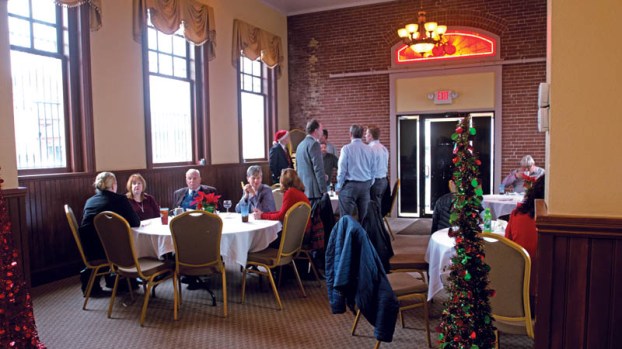 Members of the Lawrence County Bar Association gathered at The Depot on Thursday to celebrate the Christmas season with a 150-year-old tradition — The Tom and Jerry Party. The attorneys used the event to network and talk.

On Thursday, the members of the Lawrence County Bar Association gathered at The Depot to celebrate the Christmas season with a 150-year-old tradition — The Tom and Jerry Party.

The name comes not from the famous cat and mouse cartoon characters, but rather from a cocktail local attorneys used in a toast.

McCown, a member of the Lawrence County Bar Association for 22 years and a past president, explained that attorneys would work until noon on Christmas Eve and then let their employees go home. Then, the attorneys would gather at a local restaurant and have a toast with a cocktail called Tom and Jerry.

“It’s a horrific, terrible, nasty drink,” he said. “It’s made up of bourbon, brandy and egg whites that are whipped.”

The attorneys still have a drink called a Tom and Jerry, although the ingredients have been switched to something more palatable. Most of the attorneys skipped the drink and had soft drinks, tea or coffee.

McCown said that while the tradition continues, it has changed in the past couple of decades from a toast to a luncheon, where some of the 50-75 members of the bar association, young and old, gather to network and talk about their profession.

“Up until the last decade and a half, it was really still on Christmas Eve,” he said. “But people started taking that day off to be with family, so it was moved to a lunch event,” he said. “Now, some attorneys stay for the whole event. Some just pop in for 10 minutes or so. It is an opportunity for us to get together outside of the courtroom where emotions sometimes run high. We just get together and talk. Maybe set up some mentoring. It’s really about fellowship.”

Party Place in Ironton will host event each month Martin Jackson, the owner of the Party Place, said he wants... read more