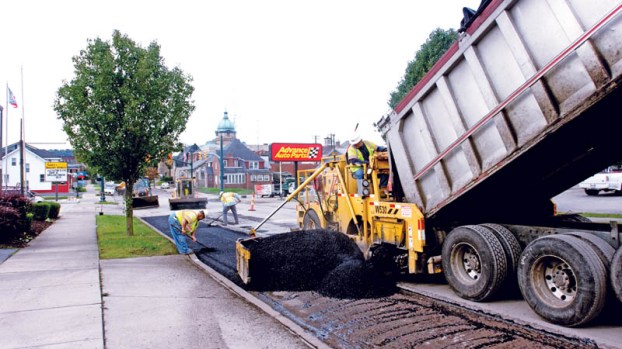 Crews from the Shelly Company fill in a spot on Park Avenue that was milled down to the bricks on Tuesday morning. The work is part of an Ohio Department of Transportation repaving project of Route 93 in Ironton.

It is going to be an interesting week for traveling in and out of Ironton.

First, the Oakley C. Collins Memorial Bridge is closed from 8:30 a.m.-2:30 p.m. until Friday so it can undergo its annual inspection.

That means vehicles are being rerouted to the one Ashland bridge that is open, the 13th Street/Simeon Willis Bridge, and causing heavy traffic in the morning and early afternoon.

And people entering Ironton onto Park Avenue are dealing with crews repaving the roads.

On Tuesday, crews from the Shelly Company were milling sections of the road down to the brick, putting in spray tar and then filling it in with asphalt again, as vehicles made their way around the road equipment.

The work is an Ohio Department of Transportation project to repave State Route 93, which runs from the city limits, all the way down Park Avenue to Jefferson Street by the bridge.

“It’s a simple paving overlay project, no major work” said Kathleen Fuller, the spokesperson for ODOT District 9, adding the project is scheduled to run until mid-December but “barring any unforeseen issues, it will probably been done before that. We don’t expect anything to slow it down.”

Fuller said that one issue of doing roadwork in the fall is the temperature when putting down the pavement markings and striping.

“Getting into cold weather, you do have to have temperatures above 50 degrees to put down permanent markings,” she said. “But that is not a major issue, it will get done.”

“I haven’t talked to them today,” she said on Tuesday afternoon. “But they said they would call if there were any issues. Usually, these go on without any type of incident or problem.”

Even though the bridge is only a couple years old, ODOT inspects every one of their bridges every year.

While the bridge is being inspected, West End Electric is doing some work on the bridge at the same time, so they can do work while there is no traffic.

Gubernatorial nominee addresses Democratic dinner “I believe this is the start of a blue wave in Ohio,” Lawrence County Treasurer... read more