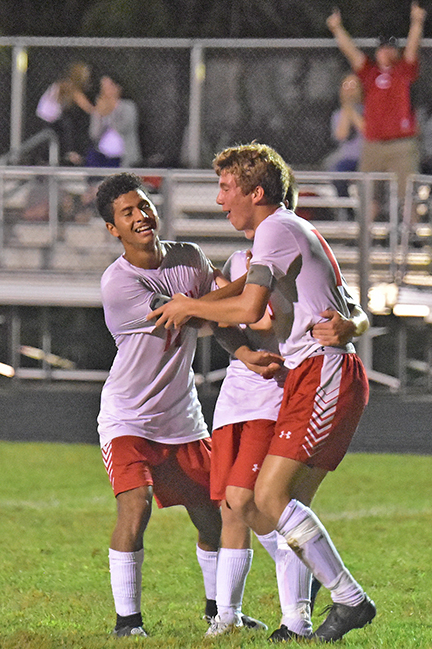 PROCTORVILLE — Victor Aguilera got his 100th goal and then started on the next 100.
The Rock Hill senior scored the 100th goal of his career in the first half of Tuesday’s soccer game, then scored again just before the half as the Redmen blanked the Fairland Dragons 2-0 in an Ohio Valley Conference game.
Aguilera got an unassisted goal at the 31:57 mark to give him his milestone.
“It’s pretty amazing what he has been able to accomplish in essentially two and one-half seasons,” said Rock Hill coach Luke Simpson.
“We did not have a team his freshman season and with his injury this pre-season he missed the first half of the season.”
The game was stopped and Fairland coach Jason Wyant presented Aguilera with the game ball.
“We want to thank Fairland for going above and beyond and recognizing Victor for his 100th goal. Jason Wyant is a class act and a great coach,” said Simpson.
Aguilera got his second goal off an assist from Jake Blagg with only 4.5 seconds on the clock to go up 2-0 at the half and the defense made it stand up.
“That second goal gave us a great momentum swing going into the half,” said Simpson.
“Defensively, we were able to accomplish our eighth shutout of the season. A lot of times the defense doesn’t get the recognition they deserve, but we have a very good group of defenders and keeper. We are very proud of what they have been able to accomplish so far this season.”
Rock Hill goalkeeper Kaleb Kidd had six saves and Fairland had 15. The Redmen had seven corner kicks while the Dragons did not have a corner kick.
Rock Hill currently leads the OVC with a 7-0-2 record and have clinched at least a share of the title. Gallipolis must win its final two games to tie. A loss or tie gives the title outright to Rock Hill.
Gallipolis plays at Rock Hill next Wednesday.
Rock Hill (11-0-2-) plays at Minford on Thursday and hosts Lucasville Valley on Monday.
Ohio Valley Conference
Soccer Standings
Team W L T Pts.
Rock Hill 7 0 2 23
Gallipolis 5 1 2 17
Fairland 4 2 2 14
South Point 3 4 1 10
Chesapeake 2 6 1 7
Portsmouth 0 8 0 0
NOTE: Teams get 3 points for a win, 1 point for a tie