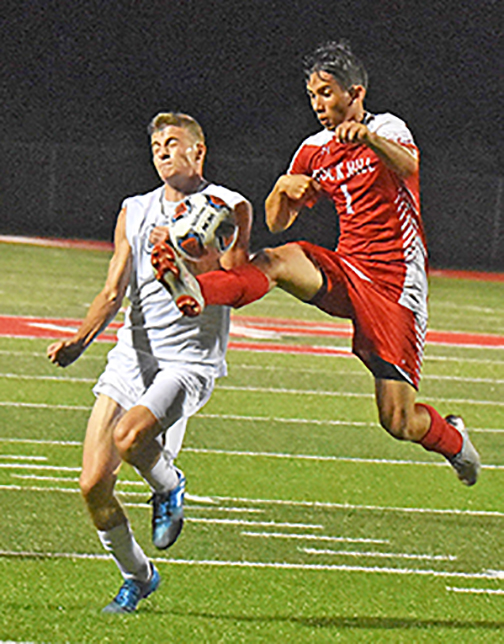 CHESAPEAKE — Popeye the Sailor was strong to the finish ’cause he ate his spinach. Maybe the Rock Hill Redmen soccer team has added spinach to their diet.
Tied 2-2 with 13 minutes left in the game, Rock Hill finished strong and beat the Chesapeake Panthers 5-2 in an Ohio Valley Conference game on Saturday.
“It was a good, hard-fought game by both teams,” said Rock Hill coach Luke Simpson.
“We were able to finish strong and score three goals in the last 13 minutes. Chesapeake is a very good team, fundamental and well-coached as always. Steve does a great job of getting them ready to play. We’re glad to be able to pull out a victory against a solid opponent.”
Victor Aguilera — in his first game back from an injury the first week of August — must have eaten an entire can of spinach as he scored four goals and had an assist.
Jake Blagg had the other Rock Hill goal while Dakota Fugett and Mason Parkes each had an assist. Goalkeeper Kaleb Kidd and five saves.
Aguilera’s goals came at 7:28, 26:45, 76:56 and 80:45.
The Redmen had 16 shots, 10 on goal and four corner kicks. Chesapeake had 16 shots including two corner kicks.
Rock Hill is 4-0-1 and 2-0-1 in the OVC and had a key game against Fairland on Tuesday.