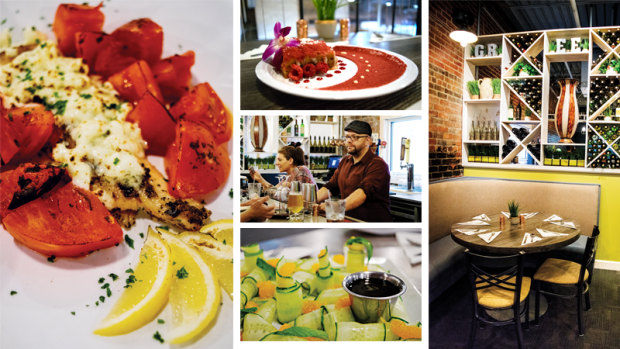 In March of this year, he decided to launch his own restaurant, Navarino Bay, located at 809 3rd Ave. in Huntington in the former Wild Dawg location. Photography by Valerie Campbell.

Fresh from the kitchen

Georgios Alexandropolous has worked in the restaurant business for many years.

His family owns Jolly Pirate Donuts in Huntington and he has worked there, and at Fat Patty’s for 10 years.

In March of this year, he decided to launch his own restaurant, Navarino Bay, located at 809 3rd Ave. in Huntington in the former Wild Dawg location.

“This is my first personal attempt on my own,” he said of the business, a modern Greek establishment employing about 30 people, which he says straddles the categories between fast casual, for the lunch crowds, and sit-down dining for dinner.

“Someone called us the Olive Garden of Greek restaurants,” Alexandropolous said. “That’s a good category to put us in.”

He said the restaurant has proven a hit since its opening.

“Business has been great and the reaction from the community is outstanding,” he said.

As for what menu items have been popular, he said, “Everything.”

He said the saganaki, a fried cheese appetizer, is a big favorite of customers, as well the quail, rack of lamb and souvlaki, consisting of meat and vegetables served on a skewer.

And gyros have been a big seller with the lunch crowd.

“Everyone know gyros,” he said.

The restaurant seats about 83 people and offers dinner to go. He said they have done limited catering and are looking into the possibility of a full-fledged service. He said they do large orders, if they have a day or two of notice.

As for the location’s décor, he said he wanted to avoid the heavy use of white and pictures of Greece.

“I find that kind of clichéd and tacky,” he said.

He instead emphasized greys and the buildings brick walls.

“It’s very modern chic,” he said. “It’s kind of the hipster end of the design spectrum. It’s fancy, but not inaccessible.”

Alexandropolous takes particular pride in the freshness of the food offered.

“Everything here comes prepared in the kitchen,” he said. “Nothing comes in frozen. I’ve worked in restaurants where a lot of the stuff is frozen, and we try to make everything here.”

He said most produce used at Navarino Bay comes from local vendors.

“We have fresh cut tomatoes, cucumbers, green peppers,” he said. “And our meats come from close by — out of Cincinnati.”

Alexandropolous, who was born and raised in Huntington, attended Huntington High and Marshall University.

“I love this town and did not want to move away,” he said.

As for future plans, he said it is early, but he hopes to possibly start other ventures in the region.

Navarino Bay is open Tuesday through Saturday, from 11 a.m.-9 p.m. and on Sundays from noon-5 p.m. For more information, visit NavarinoBay.net.

Boiler room houses boutique, other local offerings When Sabrina McWhorter and her husband Nick attempted to open a restaurant in... read more