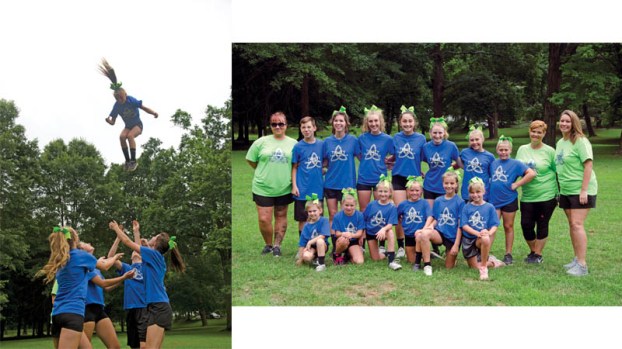 SOUTH POINT — A group of cheer, dance and tumbling students have won big at competitions, some earning national titles, but are currently left without a home to practice.

Katrina Anson was a former coach at an Ironton gym that closed in Ironton in June. Since the children were displaced, she has spent the last few months trying to establish a new home for the group, forming Trinity Cheer & Dance, LLC.

“These kids are like family to me,” she said of the students, who have not been able to practice for the last two months.

Helping her in the effort will be Rachel Murphy, who will serve as coach and whose daughter, Gabby, is a Level 4 tumbler and a flyer. They will be joined by  Leigh-Ann Baker, who will do clerical work. She said she is working on bringing in an additional coach, who will be certified, to spot the children during practice.

Anson has been trying to open a new studio to house the team, which she says will be open to all ages, and has been looking for a building. She said she has been told by Joe Freeman, the owner of the former South Point Elementary building, that he would donate the location for their use.

However, that building is in a neighborhood that is currently zoned for residential use, creating a roadblock.

Anson, along with staff and several of the children, appeared at the July meeting of South Point’s village council to make their case.

After discussing the issue, the council told her that, in order to allow use of the building, she would have to get Freeman to apply for a variance for the ordinance.

Anson said Freeman has filled out the required forms and she and the group plan on attending the Aug. 7 meeting of council to make the request. She said the South Point location is their “last hope” for keeping the group, which she describes as close-knit, together.

In the meantime, the group has been making appearances around the region, such as performing at South Point’s Party in the Park.

“They were so happy to get together and do stunts,” Anson said. “They were just so excited to be doing it again.”

Anson said there has been a core group of about 15 students, as well as parents, who have been volunteering their time, and she knows of many more who are interested.

“We keep in touch,” she said of many who attended the Ironton site. “I’ve heard from so many parents and my phone has been blowing up from people wanting to know if I’m opening a gym.”

Anson spoke of the talents the children had, such as 8-year-old Caylee Workman.

“She’s a Level 5 tumbler,” she said. “This is something she could take to go on to college. It breaks your heart.”

Angel McSorley, who is Workman’s mother, said she also is having trouble finding a low-cost option for her daughter, who has won Flyer of the Year and placed in national championships.

“I wouldn’t be able to afford some of the other places,” she said. “And lots of kids are the same way. She hasn’t had the gym and been able to do any of this.”

Anson said her goal is to provide the children, many who come from low-income households, with a home base. She said the group she is working with has traveled as far as Florida and Chicago to take part in past competitions.

Shannon Wilson, of Coal Grove, is one of the parents working with Anson. She said her family is on a budget.

“A lot of these families can’t pay much, but the kids have the desire and the ability,” she said.

In addition to resolving the building needs, Anson said there will be financial needs for equipment, particularly mats and spring flooring for a practice space, as well as a tumble track. Flooring, she estimates, could cost up to $7,000.

She has been working to secure donations from area businesses for the group, has also been conducting bucket drives.

Anson said they will be at Advance Auto in Ashland on Saturday from 10 a.m.-2 p.m. for a car wash and that Texas Roadhouse in Ashland has agreed to do a 10 percent fundraiser on Monday.

“We don’t have a lot,” she said of funds. “But we have a lot of heart. If businesses ran on heart, we’d be well off.”

‘Saved by the Belt’