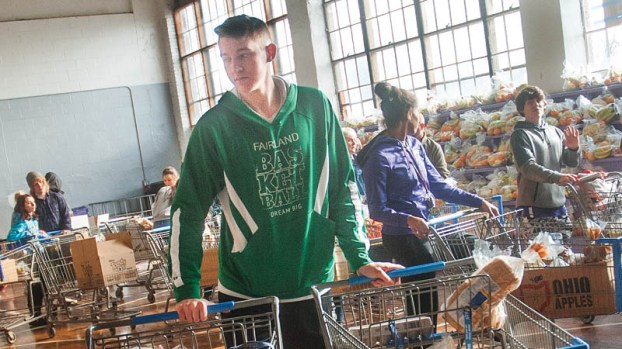 CHESAPEAKE — The traffic was continuous at the Chesapeake Community Center on Wednesday as Community Mission Outreach conducted its annual food, toy and clothing giveaway for the holidays.

Volunteers began work on Tuesday, preparing the food packages in carts, which would be wheeled out for pick up by families at the center’s rear entrance.

The items went to economically-deprived families who registered with CMO in advance of the event.

One of the volunteers was Sheila Ellis, who was lining up the filled carts.

“We have chicken, ham and turkey, macaroni and cheese, stuffing, butter, potatoes, salmon, corn,” she said, listing some of the items in each cart.

Don Moore, president and founder of Chesapeake Community Mission Outreach, who was coordinating the effort, said he expects more than 500 households would be served by the end of the day.

He said the goods came through donations, as well as funding from civic organizations and the government.

“We get funds from United and FEMA,” Morris said. “And we get a lot from churches. There are 16 churches who help fund the food pantry. And we get help from individuals and businesses.”

In addition to the holiday giveaway, CMO provides food to low income families year-round. CMO has been in operation since 1985.

In addition to CMO staff and volunteers from the community, a number of high school students were assisting in the work.

“We have students from Chesapeake, Fairland and South Point here today,” Danny Newman, who was coordinating the teens, said. “They showed up yesterday.”

Newman said Fairland and Chesapeake were returning this year and that South Point had joined this year.

One of those wheeling carts outside was Taylor Burnette, of Chesapeake.

“A lot them are from the Beta Club and the National Honor Society,” she of her school’s volunteers. “And there are others here, too.”

Kandace Townsend of Chesapeake was loading cans of beans into a cart. She said it was her first year volunteering.

The effort took place in the gym, while down the hall, two rooms were filled with toys, one for new and others for used.

“We have clothing, make-up and other things,” she said.

“Santa is here, giving out toys,” volunteer Belinda Rice said. “And we have bags of candy. We’ve probably had 75-100 people come through the room. We’ve been able to help quite a few people.”

Shop with a Cop provides for 48 children this year SOUTH POINT — Dozens of kids in Lawrence County will... read more