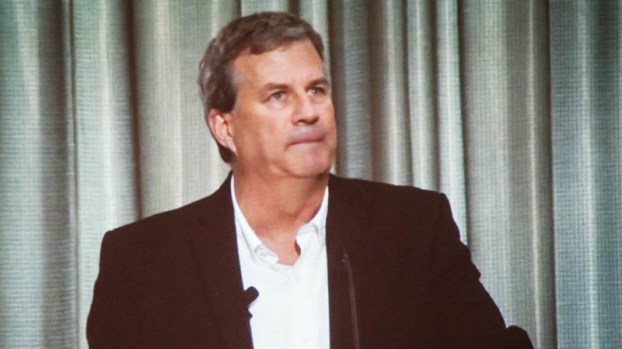 Sam Quinones, author of “Dreamland,” a true tale of America’s opiate epidemic, appeared at Ohio University in Athens on Wednesday and a simulcast was broadcast to Ohio University Southern campus in Ironton.

Author Sam Quinones spoke on the opioid epidemic to Ohio University’s main campus in Athens on Wednesday, but, thanks to a simulcast event, people in Ironton were able to watch the event at the local campus here in town.

Quinones, who was a reporter for the Los Angeles Times, is known for his reporting on issues regarding Mexico. His 2015 book, “Dreamland,” details the history of the opioid epidemic in America, particularly in Ohio and the Appalachian region. It won the National Book Critics Circle award for nonfiction and was named one of the best books of the year by Amazon.

“People wanted the program here and we helped with the funding,” she said.

Quinones was introduced in Athens by Randy Leite, dean of the College of Health Sciences and Professions in Athens.

“Everyday, people in our community are profoundly impacted by the opioid epidemic,” he said, noting that Quinones had written the definitive account of the origins of the crisis.

Quinones thanked the room for the attendance, noting that when he first visited the region to look into the matter, people were hesitant to talk, whether out of “shame or fear.”

He said he has traveled nationwide to speak, following publication of his book.

“There just doesn’t seem to be a place that hasn’t been affected,” he said. “And we all know, in Ohio, it’s particularly severe.”

He said he was first drawn to the story when he heard of a report from Huntington, West Virginia, in which several people had died in one weekend from overdoses of black tar heroin.

He said the news puzzled him, as, at the time, the substance was not known to be in areas like West Virginia.

After speaking with officials in Huntington, he was told the problem was coming from the Columbus area. From there, he was able to trace it back to Xalisco, a small village in the Mexican state of Nayarit.

Quinones spoke of his prior experience covering Mexico, noting that there are many town that are devoted to one industry.

“One makes nothing but popsicles,” he said, noting that almost all residents in these towns have the same occupation.

In Xalisco, he said the heroin industry has become the economic center of the village.

He spoke of how dealers from Xalisco would run heroin to the United States, often exchanging the drug for American blue jeans, a sought after status symbol back home.

“This system was a perfect system for transforming black tar heroin into stack of gleaming Levis 501 jeans,” he said, adding that the dealers would take the clothing back to Xalisco and distribute it, inspiring more to join the trade.

“They would think ‘I’m going to go up to the U.S. and drive heroin around,’” he said.

He said that the growth of “cheap, Mexican labor” had moved the heroin trade closer to the U.S. than it had been in the past, when it was based in nations such as Turkey, Thailand and Burma.

“By the end of the 1990s, virtually all of it comes from Latin America,” he said.

He said the growth of the Mexican trade coincided with changes in the U.S. medicine, in the form of the “pain revolution,” in which prescription painkillers were pushed heavily.

“Doctors were not working on wellness and people developed the attitude that the doctor was there to fix everything,” he said.

“Some of these people came from car rental businesses and other places,” he said. “They said, if you can push those, you can sell pharmaceuticals,” Quinones said.

He said the painkillers, derived from the opium poppy were originally portrayed, falsely, as non-addictive and doctors began to overprescribe them.

“In time, the marketing worked,” he said. “Pressure was put on doctors to rethink what they had learned.”

He said the field shifted especially hard when Perdue Pharma introduced Oxycontin in 1996, accompanied by a major marketing push.

As the use of painkillers increased, Quinones said it timed out perfectly with the “Xalisco boys” moving east, establishing business in Columbus, where they saw no competition.

He said the dealers became “master marketers,” offering deals to addicts and even “customer service,” taking calls when the heroin was not as strong as hoped for.

“These guys were very effective, selling the drug, over and over,” Quinones said.

Quinones’ book takes it name from the swimming pool he said was once the community center of Portsmouth.“

It was an all-American town,” he said. “You had a steel mill, a shoe factory, a bustling Main Street, and, at the center of that, was this beautiful swimming pool.”

He described the pool as “where everyone saw everybody,” and class divisions “kind of melted away.”

However, in 1980, he said the steel mill left town and the shoe factory was already closed, leading the city into an economic downward spiral.

“It was replaced with a sea of asphalt, and a strip mall with an O’Reilly Auto Parts at its center,” Quinones said.

He said the loss of Dreamland was symbolic of the loss of a sense of community in Portsmouth, which he said was the site of the nation’s first “pill mill.”

“There were nine million pills being distributed for a town of 20,000 people,” he said. “There was such overprescription taking place, that two generations became addicted.”

He said the region developed “an Oxycontin economy,” in which many people would even pay for goods with pills.

And with Oxycontin, he said heroin soon followed.

“Before Oxycontin, there was no bridge to heroin,” Quinones said. “No one got desperate enough to switch to heroin.”

But he said this became common, as people were either cut off by doctors, lost insurance or were otherwise unable to stay on the prescriptions.

Quinones, in his book, said the way to end the opiate epidemic is to restore a sense of community in towns.

He praises Portsmouth for its work in this effort, and says it has turned into a “recovery community.”

Women of Appalachia Project going on