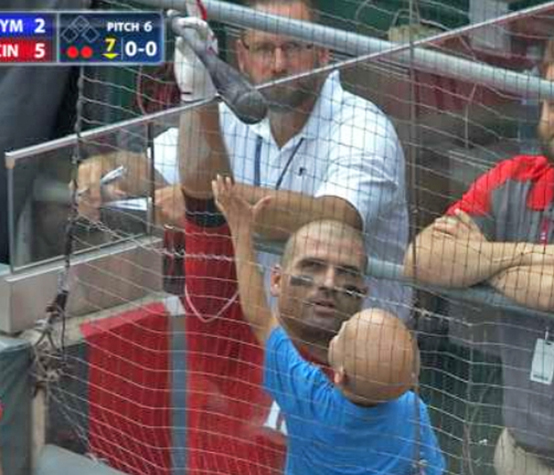 Cincinnati Reds’ first baseman Joey Votto (left) hits his 34th home run of the season on Thursday, then gave the bat along with a jersey and a “high five” to 6-year-old cancer patient Walter Herbert (right). Votto met Herbert a week earlier during the boy’s “Make A Wish” visit to see the Reds and meet Votto. (Photo Courtesy of The Cincinnati Reds.com)

CINCINNATI (AP) — A young cancer patient got quite a souvenir when Reds star Joey Votto hit a home run. A couple of them, in fact.
After Votto rounded the bases in the seventh inning during a 7-2 win over the Mets on Thursday, he waved to 6-year-old Walter Herbert , who was sitting in the front row near the Cincinnati dugout and wearing a blue shirt that said: “BE KIND.”
Votto high-fived the boy, then gave him a bat and a red No. 19 jersey while the game went on.
“We did not expect that,” Walter’s mom, Emily, said in an interview with The Associated Press after the game.
“We thought he’d say hi when he recognized him. We were very surprised he went all out.”
Votto declined to talk about his gesture after the game. Told that the family was thrilled, Votto said, “Well, that’s what’s important.”
The big-hitting first baseman met the boy a week earlier when he was at Great American Ball Park courtesy of the Make-A-Wish Foundation.
Walter had a question for Votto in that first encounter on the field.
“He said, ‘Do you have any bubblegum?”’ Emily Herbert said. “Votto said, ‘Buddy, I got you.”’
Votto took the boy into the Reds clubhouse and got him some gum and a bat. They also posed for a photo.
The family got tickets for Thursday’s game from The Dragonfly Foundation that helps young cancer patients. Fans sitting nearby took photos of Votto’s generosity and posted them on social media.

CINCINNATI (AP) — The Reds ended New York’s domination in Cincinnati with an emphatic win and a feel-good moment —... read more