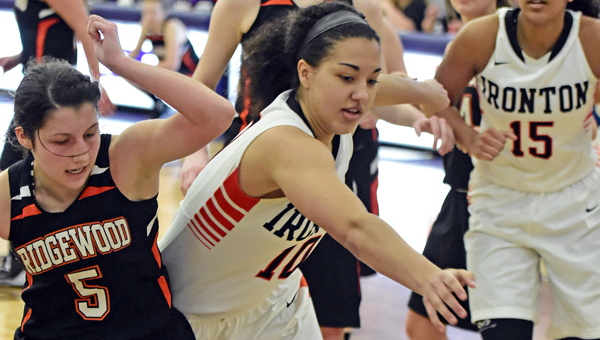 There is the mental pressure of playing in a big game such as Thursday’s Division III state semifinal game.

And then there is the pressure of an opposing team that wants to apply tight defensive pressure.

The Ironton Lady Fighting Tigers will experience both types of pressure when they face the Columbus Africentric Lady Nubians at 3 p.m. on Thursday in the Ohio State University Schottenstein Center.

“We have to be able to handle their pressure. They like to pressure you and trap you up and down the floor,” said Ironton coach Doug Graham.

Ironton (27-0) is the only unbeaten team in the Final Four in any division. Graham said playing in a good league and putting together a strong non-conference schedule has helped prepare his team for its tournament run.

“We’ve played a lot of different teams and different styles,” said Graham. “The girls have been successful all season with whatever has been thrown at them. I told them from day one they can do this. They’ve got to believe in themselves.”

Ironton is making its fourth state tournament appearance and first since 2010. The Lady Fighting Tigers also qualified in 1980 when there were only three classifications and again in 2005.

The Lady Nubians use their depth to fuel their pressure game.

“They play a lot of people. They’ll go eight, nine or even 10 deep,” said Graham.

Leading the way for Africentric is Jordan Horston —a 5-foot-11 freshman — averages 11 points a game. She was a first team all-district pick and second team All-Ohio.

Named third team all-district was 6-foot senior Zharia Lenoir who averaged 13.1 points per game including 43 3-point goals. A part-time starter, Lenoir had five in a 77-28 rout of Independence and four in a 69-55 win over Eastmoor.

“They’re athletic. Their athletic ability reminds me of Chillicothe and they like to crash the boards,” said Graham.

“Lenoir and Azubike have some athleticism especially on the perimeter. Lenoir is a strong player for them and shoots the ball pretty well. Azubike is a nice all-around player. Morrow is aggressive and gets to the rim, Horston is a really good ball-handler. She’s just a freshman and she’s going to be a really nice player.”

Despite their tournament history, neither team has had state tournament experience.

Barrier — who averaged 18.1 points a game — is joined in the starting lineup by seniors Cheyenne Scott and Jordan Hannan, junior Sydney Webb and sophomore Lexie Wise.

Scott and Webb were also named All-Ohio while Graham was the Co-Coach of the Year.

Off the bench are Alyssa Lewis, D’Laynie Keith and Zakia Lee.

The two teams met in the regular season last year. Ironton led 18-16 at the half before Africentric rallied to go up 34-30 after three quarters.

Ironton went cold in the fourth quarter as the Lady Nubians outscored the Lady Tigers 20-6 to win 54-36.

“We like to play like they do. It’ll be a fun game,” said Will McKinney, the only coach the Africentric program has known.

Gilmour Academy is led by 6-2 sophomore Naz Hillmon who was the Northeast District Player of the Year. A first team All-Ohio selection, Hillmon averages 17.7 points and 9.0 rebounds. She blocked 48 shots.

Thursday’s winners will meet at 10:45 a.m. on Saturday for the state title.